Experience history in the making at the first ever live comedy show ON TOP of the legendary Montalban. With the stars up above and LA’s bright lights in the background, Hollywood Rooftop Comedy features four comedians, a DJ, and drink specials to make for one incredible evening. Hollywood Rooftop Comedy rises up Saturday, July 11, headlined by the hilarious ANDREW SANTINO, and featuring JERROD CARMICHAEL, FAHIM ANWAR, and SARAH TIANA.

Andrew Santino is most known for starring in ABC’s comedy Mixology and Yahoo’s first digital series, Sin City Saints, alongside Malin Ackerman and Tom Arnold.  Named one of Comedy Central’s 10 Comics To Watch, Andrew is a regular on the network, appearing in the second season of The Meltdown hosted by Jonah and Kumail and is a frequent guest on the hit show @ Midnight. He will also be taping his stand up special for Comedy Central this summer. Andrew got his start acting and writing on the final season of Punk’d for MTV and his stand up television debut was on Adam Devine’s House Party. Since then, he has performed stand up on Conan, and has guest starred on Adult Swim’s Children’s Hospital, Netflix’s Arrested Development, HBO’s Family Tree, NBC’s The Office, and FX’s The League.

Jerrod Carmichael is an LA based standup comedian and performer originally from Winston-Salem, North Carolina. Jerrod is currently in production on his NBC series The Carmichael Show, which he stars in and executive produces.
Fahim Anwar is a Los Angeles-based standup comedian, actor and writer. Formerly an aerospace engineer at Boeing, Fahim traded the cubicle for the stage and has never looked back. His Afghan parents however plead with him to look back nearly every day. "Is comedy worth throwing your life away for?" Fahim says, yes!

Sarah Tiana has been a “working” comedian/ex-waitress in Los Angeles since 2003. Originally from Calhoun, GA, Sarah’s act emphasizes the thrills of growing up after “The War Of Northern Aggression” and trying to survive in the current battle of the sexes.  She doesn’t call herself “single,”  (she’s too old for that), she prefers to be called “sexually active.”

Be there to laugh it UP on the coolest rooftop in Hollywood @ The Montalban! 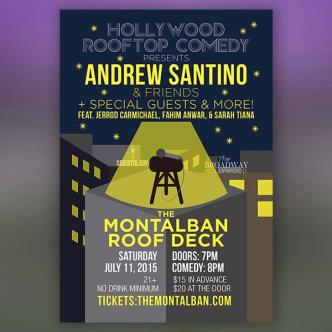