Honolulu's KINGS OF SPADE return for another night of foot-stomping, high-energy, original, urban funk, soul, blues, and rock at The Republik.  Fresh off the heels of a 22 city Mainland tour this past March and the release of brand new music video, "Way She Goes" KINGS OF SPADE are throwing this fundraiser for their 2nd studio album which is being completed in Nashville in September and set for release in October this year.   They are sharing the stage with Tempe, Arizona blues rockers, SARA ROBINSON & THE MIDNIGHT SPECIAL.  Fronting the band is 20 year old Sara Robinson, a power-house vocalist reminiscent of Joss Stone & Janis Joplin.  KINGS OF SPADE have toured from California to New York and consider SARA ROBINSON & THE MIDNIGHT SPECIAL one of the bands you absolutely must see.

Phoenix New Times listed SARA ROBINSON & THE MIDNIGHT SPECIAL as 1 of the 13 bands you need to know in 2013. They have shared the stage with Eric Church and Arizona royalties, the Gin Blossoms, and Roger Clyne and the Peacemakers. They were part of the 2013 McDowell Mountain Music Festival which featured The Roots, Umphrey’s McGee, The Shins and many more. 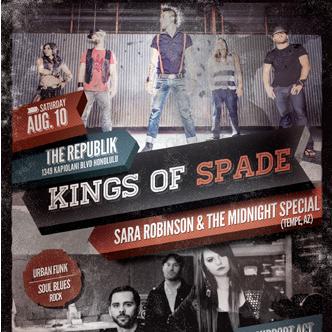