limited tickets at the door

Limited amount of FREE before 10:30pm with SeeTickets RSVP. These are available until 5pm Friday Oct 22nd or until we run out of the allotment.

Phoenix based Walter Productions is well known globally for creating over the top immersive entertainment experiences. The team's latest creation, The Walter Where?House is a unique art focused event and performance space in the new industrial area of downtown Phoenix. The engaging and community oriented collective of creatives, makers, builders and performing artists cultivate a space that is as inclusive and safe as it is fun. The fleet of super-sized art cars: Walter, Kalliope, Heathen, Big Red, Mona Lisa and Peace Train combined with a with freshly installed state of the art sound system makes Walter Where?House a place for making connections and memories in a venue unlike anything else in the world.

Covid Protocols required for entry: Please provide proof of full vaccination (digital passport, Vaxx card photo on your phone or the actual card). You can also show proof of a negative covid test (PCR or Antigen) taken within 72 hours of the event start time. We are offering Free on site rapid testing for this and suggest coming a bit earlier.

As a young girl in upstate New York, Öona Dahl was fascinated with music and became obsessed with listening to old cassette tapes in her living room. This passion quickly evolved and before long she began making musical sketches in Acid Pro and Fruity Loops.

Wanting to experience electronic music on the dance floor, many excursions into the Toronto rave scene were made. Inspired by the DJ’s around her, she bought a pair of turntables and set about learning to mix records. Soon she was playing clubs, raves and warehouses at the age of 17. These formative years crystallized Öona’s love of underground dance music.

Öona moved to Florida in the early 00’s to spend her college years studying sound design and digital media as she immersed herself into the Florida underground. Bouncing between events in Orlando, Miami and Tampa she became a fixture in the scene and eventually met DJ Monk (Rabbit In The Moon) and DJ Three from Hallucination Recordings, forming a close bond which continues to this day.

By 2012, Öona’s music was getting into the hands of DJ’s and making waves on dance floors which would lead to her Let The Light In EP being released on Lee Burridge’s label All Day I Dream. Regular DJ bookings at the party series of the same name soon followed with Öona often being entrusted to play the closing set. She would go on to further explore this sound with two EP’s for Anjunadeep in 2018 and 2019.

Meanwhile, Öona was developing another side of her music that was both more experimental and song-based than her initial dance floor offerings. Exploring early influences like the ambient stylings of This Mortal Coil, Bjork’s electronica and Brian Eno’s soundscapes. Öona’s efforts caught the ear of DJ Three and before long she was signed to an album deal with his Hallucienda imprint. In 2017, the five-track Wait. lifted EP (including a music video for the title track) acted as a musical signpost threading the needle through leftfield house, electronica, and pop-infused ambience. Her debut artist album Holograma soon followed revealing a full body of work by an artist who had now found both her feet and, her voice across the full spectrum of electronic music.

Moving into 2021, Öona Dahl has since delivered a wave of new sounds. Her self-released Road to Awe EP on Bandcamp and the Godtripper EP on Watergate Records deliver deep, bouncing grooves with a subtle acid touch beneath her unique vocal textures. As Slumber, her collaboration with Amber Cox, their ability to balance darkness with the light is deftly explored on their XLR8R+ track ‘Fell Into A Dream’ and the Twin Moon EP via modern balearic house imprint Rumors. 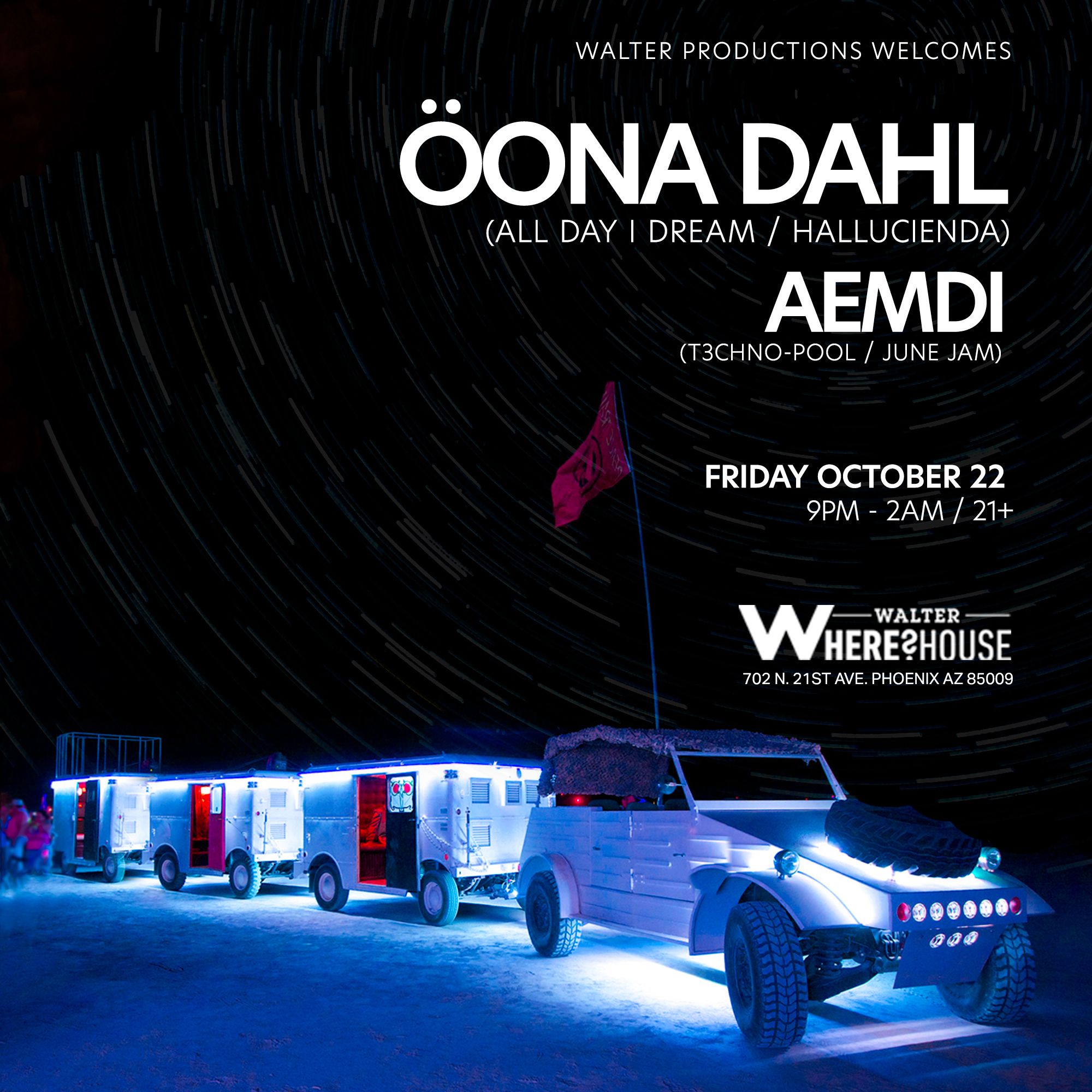