How do you approach analbum as tantalizingly complex as Paralytic Stalks?

You could begin from alyrical perspective and appraise the occasion it provides for an unobstructedview directly into the psyche of Kevin Barnes, of Montreal's principalsongwriter.

But be prepared -- onelisten to "I spend my waking hours haunting my own life / I made the one Ilove start crying tonight / And it felt good" ("SpitefulIntervention") immediately reveals this is not Barnes filtered through thelens of an adopted persona or invented alter ego.

Rather, these areconfessions of an infinitely more personal nature than anything he's writtensince 2007's Hissing Fauna, Are You the Destroyer?

Amidst dark ruminations onhuman existence, revenge, self-hatred, and his relationship with wife Nina, oneencounters an emotionally raw Barnes struggling to contain his savage thoughts:"So much violence in my head / How are we still alive?"("Authentic Pyrrhic Remission").

And though it's easy tobecome totally immersed within the captivating power of these revelations songafter song, focusing only on the lyrics would prevent you from fullycomprehending the true depth of

Because in a different,yet equally enthralling manner, Paralytic Stalks's musical dimensionproves itself similarly worthy of preoccupation.

For on a sonic level, thealbum -- recorded at Barnes's home studio in Athens, GA and mixed at Chase ParkTransduction with the assistance of engineer Drew Vandenberg (Deerhunter,Toro y Moi) -- is a stimulating array of densely packed ideas presentedwith stunning agility.

Never before has an ofMontreal record moved so fluidly from one song to the next -- each trackfeeding off the last in what seems a singular album-long movement that neverallows you to rip your ears away.

After the addition ofclassically trained violinist Kishi Bashi to of Montreal'stouring line-up, Barnes embraced the idea of working with session musicians(many of whom were Kishi Bashi's friends) for the first time in his career.

During this period, Barnesforged a special connection with Zachary Cowell, a session musician whosubsequently arranged all of the album's brass and woodwind parts (and is nowthe band's newest member).

The experience alsoemboldened Barnes to venture into previously unexplored

territory with hissongwriting. As a result, Paralytic Stalks at times resembles modernclassical with its intricate compositions, while at others echoes of neo-prog,pseudo-country, and 60s pop can be heard.

Examples of these newelements abound throughout the record, notably on "Wintered Debts,"which witnesses its hushed vocal and acoustic guitar intro giving way to acountry shuffle replete with pedal steel guitar, as well as the flute-driven, ELO-inspiredsingle "Dour Percentage."

And yet, above all, ParalyticStalks remains absolutely defiant of any labels that attempt to completelypin down the type of music Barnes creates.

As such, ultimately itdoesn't matter what angle you choose as your entry point. Because the album'strue value is that it even forces you to question how to approach it at all.

Conceivedon the fringe of a contemporary pop music landscape that seldom encourageslisteners to dig beyond the surface level to receive satisfaction, ParalyticStalks is the rare album with the audacity to DEMAND such a response. 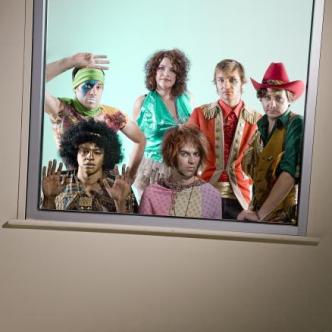