Blackfish premiered in competition at the Sundance Film Festival in January 2013, and has since captivated audiences around the world. After Magnolia picked up theatrical rights, it was one of the first projects selected by CNN to be distributed via their 24-hour news channel, with Netflix chosen to stream the film in the U.S. and abroad. Not only has the film received universal critical acclaim, it has also ignited a worldwide discussion regarding orca captivity.

The Hollywood Chamber Orchestra is the creation of music directors Noah Gladstone and Mark Robertson, both long-time members of the Hollywood recording community. The orchestra was designed to fill the void of a year- round orchestra in Hollywood. Recent concerts have included performances at the International Horn Society’s 2015 convention at Colburn School’s Zipper Hall, and at the Montalbán Theater, presenting violinist Martin Chalifour as soloist in Vivaldi’s Four Seasons. Upcoming projects for the ensemble include recording Jeremy Zuckerman’s score to the documentary film BearTrek, an album of trance music by composer Ashoka Thiagarajan, and several more classical concerts in summer 2016.

Said Hollywood Chamber Orchestra Co-Music Director Noah Gladstone, “This concert will present the film for the first time while also accompanied by a 30-piece orchestra performing the score. Many of the musicians that recorded the original soundtrack will be performing the score live, which is thrilling.”

“The score Blackfish is a personal favorite of mine. I could not be more pleased to partner with my friend Jeff Beal on this project, and present this incredible film, amazing score, and important message to a live audience,” added Mark Robertson, Co-Music Director of the Hollywood Chamber Orchestra.

Composer and guest conductor Jeff Beal, an Eastman School of Music graduate, has been nominated for 15 Primetime Emmy Awards, winning four times for his work on Nightmares and Dreamscapes, Monk, The Company, and most recently, House of Cards. He has also scored the films Appaloosa, Pollock, and The Queen of Versailles. He has provided music for the upcoming films Weiner, The Champions, and HBO’s My Promised Land.

Blackfish tells the story of Tilikum, an orca captured in the wild in 1983. Tilikum was responsible for several violent encounters before taking the life of his trainer in 2010. Director-producer Gabriela Cowperthwaite sought to understand why and how this happened. Her film includes shocking behind the scenes footage, emotional interviews with former trainers, and provides an in depth look at orcas used for entertainment. Blackfish explores these creatures' extraordinary nature, their treatment in captivity, the lives and losses of the trainers, and the pressures brought to bear by the multi-billion dollar sea-park industry. This emotionally wrenching, tautly structured documentary challenges us to consider our relationship to nature and reveals how much we humans can learn from these highly intelligent and enormously sentient fellow mammals.

“Blackfish is expertly shot and edited, with a Jeff Beal score that suggests both ominous urgency and natural wonder."

"The most cinematic element is Jeff Beal’s fine original score, which subtly mimics the calls of orcas... " www.theartsdesk.com (7/23/13)

---
"Cowperthwaite, her editor Eli B. Despres (who also co-wrote the movie), and her composer Jeff Beal invoke many genres: thriller, mystery, melodrama.”

Jeff Beal is represented by the Kraft-Engel agency.

Any additional information and updates will be at www.facebook.com/HollywoodChamberOrchestra 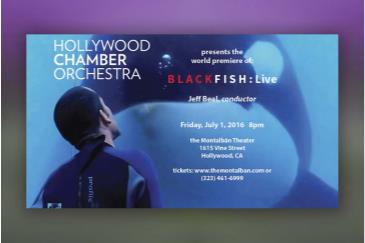