A man armed only with a banjo and a bass drum can be a formidable force, especially if his name is William Elliott Whitmore.  With his powerful voice and honest approach, Whitmore comes from the land, growing up on a family farm in Lee County, Iowa.  Still living on the same farm today, Whitmore has truly taken the time to discover where his center lies, and from that he will not be moved.

Whitmore has repeatedly carved his own path, honoring the longstanding tradition of folk music throughout his nearly 20 year career, while always allowing his blues, soul and punk rock influences to shine through.  Getting his first break opening for his friend’s hardcore band with just a banjo in hand, he would discover bands like The Jesus Lizard, Bad Brains, Lungfish and Minutemen and soon learn to play his own brand of rural, roots music with that same DIY ethic.

William Elliott Whitmore has been back and forth across the United States and to cities around the world.  He’s toured with such diverse acts as Frank Turner, Trampled By Turtles, Clutch and Chris Cornell to name a few.  He’s appeared on some of the biggest stages around the world including Stagecoach Fest, Byron Bluesfest (Australia) and End of the Road Fest (UK).  His willingness to take his show to any playing field has proved invaluable as he turned strangers to diehards with every performance.

The Walter DeBarr you see on stage today, smiling and playing and singing his heart out to devoted audiences, is not the same man he was even a few short years ago.

The early loss of a father he never met, his own young fatherhood, racism, bar fights, the death of his mother, addiction, prison, recovery… DeBarr has seen his share of trials. But through it all, music has been his beacon of hope. In his early years, it was his grandmother’s guitar and gospel hymns. Later, it was skateboarding to punk music, stacks of albums by independent artists, and moving out of his small hometown to follow the music to bigger cities–all the while dragging his own guitar around with him, from town to town and in and out of prison. Finally, after his last stint in prison, he began to find his voice in recovery and started writing his own songs.

His first EP, We Fall, We Break, was released in late 2019, followed by his single, “Eyes to the Sky,” in 2020. Compared to such artists as Gary Clark Jr., Tom Waits, Johnny Cash, and Bob Dylan, DeBarr’s raspy vocals and untrained, folky finger-picking are a style all his own. His songs often delve deep into stories of addiction and loss, but offer redemption and hope in the form of love and tight familial bonds.

When DeBarr isn’t playing solo acoustic sets, he plays with a full band that includes MacLean James on lead guitar, JD Thomas on bass, Cameron Miller on drums, Steven Schumann on cello, and his life partner, Pamela Kesling, on backup vocals. He and Kesling also occasionally perform as a duet under the name The Little Blue Hearts.

A music lover and promoter as much as a musician, DeBarr makes it his mission to spread love and good music wherever he goes. When the coronavirus pandemic hit in early 2020 and plans for tours and performances were canceled, he and Kesling formed the Appalachian Folk Online Music Festival to provide a venue to help musicians keep connected to their fans through a monthly full-day series of livestreams by their favorite independent artists.

Despite the pandemic wrench thrown in his plans just as his career was taking off, DeBarr has performed with such acts as Arlo McKinley & The Lonesome Sound, Ward Davis, Eric Bolander, Charles Wesley Godwin, Ritch Henderson, Jake Dunn & The Blackbirds, Hello June, 49 Winchester, and many more. He has performed on Red Barn Radio and headlined shows at the V Club in Huntington, West Virginia, Proud Mary BBQ in Lexington, Kentucky, the Sophisticated Hound in Princeton, West Virginia, and the Empty Glass in Charleston, West Virginia. Recently, he was named an Artist in Residence at the Kentucky Music Hall of Fame, where he also headlined a show

Driftwood Soldier is no average mandolin-bass foot-stomping gutter-folk duo. Growling and crooning, muttering about lost love, brimstone, and the glorious view from the underside of a rusty world order, Owen holds the rhythm on mandolin and foot percussion. To his left, Bobby stretches bass notes into lyrical vines that vibrate somewhere north of your liver and flower unexpectedly at night. This is the kind of roots music that grows through the cracks in a West Philly sidewalk and drinks its rainwater laced with motor oil.

Their second full-length album, Stay Ahead of the Wolf, arrived late in 2019. It was produced with Erin McKeown and mixed by Grammy winner Ted Hutt. Unfazed by a world in disarray, Stay Ahead of the Wolf crawled up onto its four legs and went barrelling through the digital ether, carrying with it this strange beast’s howl. 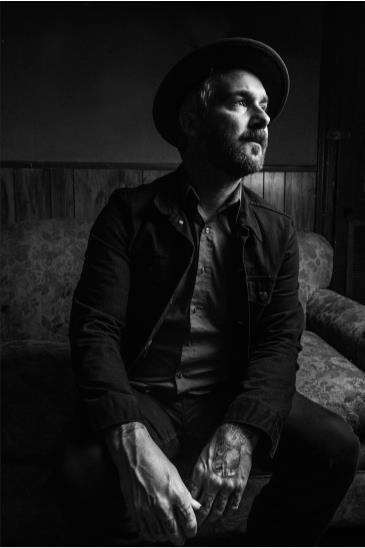