Due to overwhelming interest in Whiiite from those unable to attend we are going to reschedule this Electric Palms event until Friday, February 6th so that everyone attending other events that night such as Haunted Wonderland or Hallowbaloo will also get the opportunity to see this truly amazing DJ.

For those who have purchased tickets for this show, your tickets will still be honored for the new date. For those who cannot make the new date, refunds will be available at your point of purchase. We apologize for any inconvenience and hope to see you all on February 6th at The Republik. We don't want any of you to miss this amazing DJ!

We apologize for any inconvenience.

Providing a true multimedia experience, there's a reason that hard hitting producer/DJ Chris White (aka Whiiite) has the support ofartists like Skrillex, Chuckie 12th Planet, MakJ, Missy Elliot, Arty, DJ Vice,Gareth Emery, and Blasterjaxx.
Whiiite's production merges the electro house and hip hop music genres from his years on the rise as a resident of some of LA's most influential parties with the true set of DJing and the culture of hip hop close to his heart.  Not content to simply produce and DJ, he drew on his background in film, art,& design to take his project to new heights.

Chris developed an original superhero graphic novel series which synchs up with each of his EP's. It tells the epic story of Whiiite, his origin and powers, and the villains he faces with each character having their own dance music sound. Fans have come to fully embrace this visual aspect of the Whiiite project, and anxiously await each new song, comic issue or art piece that expand this ever evolving story.

Whiiite's story has taken him from the main stages of HARD Summer and Beyond Wonderland to playing along side Deadmau5 at XS in Las Vegas. Whiiite personifies 21st Century technology and culture, combining the auditory and visual mediums to create something truly new and unique for his fans and audiences all over the world. 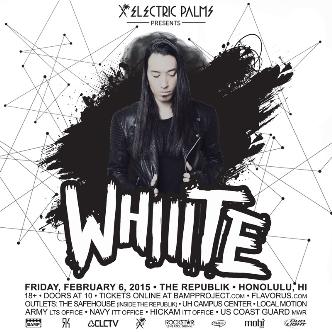