Wednesday 13: 20 Years of Fear at The Canal Club

BIO:
Heavily influenced by real life night terror occurrences of Wednesday himself, historical serial killers, and a slew of 80’s horror films, the ideas behind “Necrophaze” are bizarrely familiar, frightening, and a hell of a lot of fun. Being a collector of both media and toys, WEDNESDAY 13 was inspired by a craving for variety to create dual album artwork for this release (seen below). The covers showcase either end of the horror spectrum with a “Creepshow” comic book vibe for the LP artwork, and the eeriness of something akin to John Carpenter’s “The Fog” adorning the CD.

“Necrophaze” was recorded and mastered with Michael Spreitzer, producer, recording engineer, as well as the long time guitarist of DEVILDRIVER, and is the first WEDNESDAY 13 record to feature guest spots, which include performances by Alice Cooper, Roy Mayorga of STONE SOUR (who provides an eerie, authentic, 80s inspired synth soundtrack-score to the album), Alexi Laiho of CHILDREN OF BODOM, and Cristina Scabbia of LACUNA COIL. Also making an appearance on the album is Jeff Clayton: member of legendary punk bands ANTiSEEN & GG Allin’s MURDER JUNKIES. 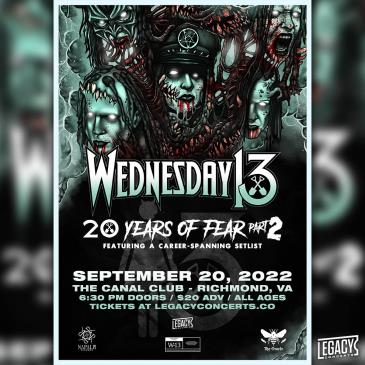