*All attendees must be fully vaccinated and be able to show proof (via card, photo of card, or QR code). SF also has a mask mandate so you must mask up when not drinking or eating. Let's keep everyone safe and sound during this return to live music!*

*This event will be a phone-free experience. Use of phones, will not be permitted in the performance space.

*Upon arrival at the venue, all phones will be secured in individual Yondr pouches that will be opened at the end of the event. Guests maintain possession of their devices at all times, and can access them throughout the event only in designated Phone Use Areas within the venue. All devices will be re-secured in Yondr pouches before returning to the performance space.

*All pouches and equipment will be sanitized prior to individual use. The Yondr staff is trained and required to follow safety guidelines and hygiene protocols to practice social distancing, minimal contact and wear required personal protective equipment.

*We appreciate your cooperation in creating a phone-free experience.

In his 1942 essay The Myth of Sisyphus, Camus wrote that “All great deeds and all great thoughts have a ridiculous beginning. Great works are often born on a street corner or in a restaurant’s revolving door.” 15 years later Richard Wayne Penniman wrote “Wop bop a loo bop a wop bam boom”, an undeniably powerful vocalization that on any given Wednesday in any given situation, civilized or otherwise, is still fully capable of setting somebody’s stuff aflame. Over ten years and seven long players into their career, White Denim are still in the relentless pursuit of a thread – in other words, a wick.

The Austin, Texas band have carefully and continuously studied the greatest records ever made, but they write songs just dumb enough to drink, dance, and fight to. Theirs is a music that aims for the whole body, while equally satisfying the mind. While it has morphed, expanded, and even burst apart, White Denim’s sincere and human drive and ability to spark true rock & roll exhilaration have been unerring constants of the band’s 10-year existence.

Down Dirty Shake is a rock and roll band based out of San Francisco. The group seamlessly blends the sounds of Latin, psych, soul, pop, and garage rock. Founded by AJ Ayez (vocals, keys), Kyle DeMartini (guitar, vocals), and Aaron Grimes (drums, vocals), while the three were high school classmates in Merced, CA, the years since they first began jamming together have seen the band's style and vision mature alongside its members. While staying true to the love of '60's blues and psychedelia that initially drew them together, they began incorporating influences from Motown, world music, Krautrock, and more. https://downdirtyshake.bandcamp.com/ 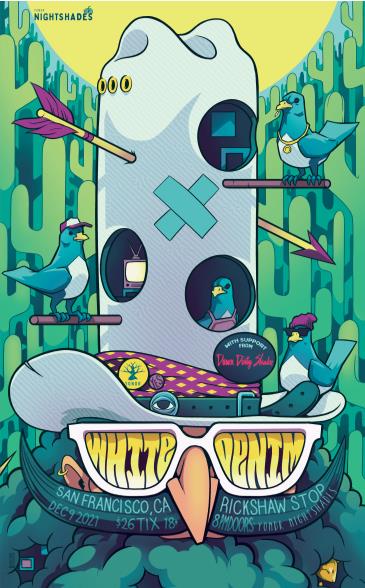