Combine the iconic Avalon Hollywood and a constantly evolving roster of boundary-pushing electronic acts and you've got the recipe for CONTROL LA. Born in 2008, the weekly phenomenon stands as the longest running nightlife party in the states and maintains its ground-breaking music programming by showcasing the strongest up-and-comers with festival headliner potential. Previous years have seen the likes of an early Skrillex, along with acts like young Zedd, Wolfgang Gartner, Porter Robinson and a pre-"Turn Down For What" DJ Snake all having graced the CONTROL stage, it's safe to say the Friday event is the premiere stop for DJ prodigies. CONTROL has sounds for everyone, diversifying its lineup with an array of hip-hop artists including Mystikal, Zaytoven, and DJ Premier. Each CONTROL LA lineup is invariably ahead of the curve and adds to the over 4,000 bands and DJs who have already performed at the renowned event.

Since first experimenting with music production at the age of eight, Whales has managed to tinker and master the art of drum and bass. Still just 19 years old, the dance music phenom has quickly risen to become one of the most popular musicians in his home country of Israel. Now, with the strength of his new single ‘Together’, Whales is finally traveling stateside to bring his unique and polished sound to a worldwide audience.

Get your tickets for March 15th and catch Whales, D-Sab, Antonio Venegas, SEMI, Tuaz, and Tronikk at AVALON Hollywood! 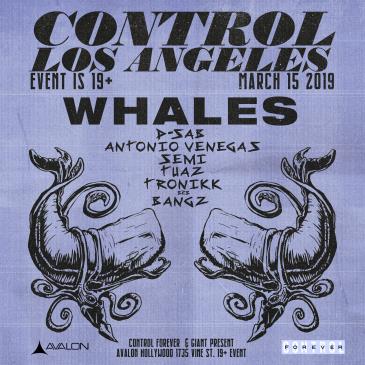