Hawaii's Finest at The Republik

Hall Doors open at 8pm - 18+
The Twinkle Brothers were formed in 1962 by brothers Norman (vocals, drums) and Ralston Grant (vocals, rhythm guitar) from Falmouth, Jamaica.  The band was expanded with the addition of Eric Barnard (piano), Karl Hyatt (vocals, percussion), and Albert Green (congas, percussion).
After winning local talent competitions, they recorded their first single, "Somebody Please Help Me," in 1966 for producer Leslie Kong.  This was followed by sessions for other top Jamaican producers such as Duke Reid, Lee "Scratch" Perry, Sid Bucknor, Phil Pratt, and Bunny Lee.  The band worked in the late 1960s and early 1970s on the island's hotel circuit, playing a mixture of calypso, soul, pop, and soft reggae, and in the early 1970s, they began producing their own recordings.  Their debut album, Rasta Pon Top, was released in 1975, featuring strongly-Rastafari-oriented songs such as "Give Rasta Praise" and "Beat Them Jah Jah".
As well as producing Twinkle Brothers work, Norman Grant also produced other artists since the mid-1970s, including several albums by E.T. Webster. In 1977, the band were signed to Virgin Records' Frontline label, leading to the release of the Love, Praise Jah, and Countrymen albums. When the band were dropped by Virgin Records in the early 1980s, Norman Grant moved to the United Kingdom, and carried on effectively as a solo artist, but still using the Twinkle Brothers name, and continued with regular releases well into the 2000s, mainly on his own Twinkle label.
Since the early 1990s Twinkle Brothers have been regularly collaborating with the Polish band Trebunie-Tutki in which they fuse reggae and traditional music from the Tatra Mountains. An analysis of this collaboration can be found in the popular world music textbook, Worlds of Music and in more detail in the musical ethnography Making Music in the Polish Tatras. 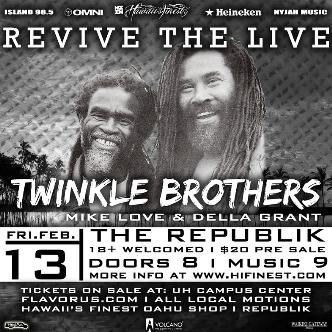