I’m a 17-year-old from Los Angeles who has been writing and recording music for 2 years now with my music partners Jonah Roy, Paco, and Jack Woods. I’ve grown up playing guitar and singing since I was 9, and still pursuing it as my passion. I’ve released my debut album Simulation with 2 music videos and an article in Forbes and the LA Times. My goal is to become a touring artist and to use my music to help people feel something, and use my music as a way to help them through whats going on in their life. My favorite part of being an artist is performing live, everyone’s energy is so high and I feel in my element. So with that follow on my journey with more music, more videos, and more shows!!
truejacksonmusic.com

Burlington-bred singer-songwriter Jack Duda began making music at 6 years old playingdrums. Influenced by eclectic jazz, punk and indie-rock, Jack became a Multi Instrumentalistproducer, vocalist, guitarist and songwriter. As a huge fan of Vampire Weekend Duda couldn'thelp but feel thrilled when their former manager michele harrison discovered his music andasked to manage his project. Taking a leap of faith on himself 21 yr old Jack Duda packed hisguitar, his favorite pair of berks and moved to LA. Spending hours and hours in a makeshifthome studio, he has been further cultivating his own sound. Recently he has been collaboratingwith LA based singer/songwriter No/Me (cobalt) and producer Sam Ricci (Kendric, SZA). He'scurrently focused on completing his debut ep lead title Honey Bee out this september 17th.Peep his tik tok which has recently garnered over ten million views for an insight on hisupcoming collaboration with honey girl grows in an effort to save pollinators across california.

Lunarcode, based out of Los Angeles, waws born during the Pandemic between Lead Guitarist Ronny Minuche and Lead Vocalist Vincenzo Carubia.  Jason Booth joined and finally Richard Smith on bass, so we are still a new band, we have worked on writing and recording our debut album coming out in February.
https://lunarcodemusic.com
Spotify
https://www.instagram.com/lunarcodemusic/?hl=en

Founded in early 2021 by lead vocalist / writer Londynne, Londynne’s Falling is an American rock band based out of Los Angeles, California. Born out of the angst of a worldwide pandemic and economic shutdown, their emo-punk style is apparent through both their fast-paced music and emotionally introspective lyrics. Current members include singer and rhythm guitarist Londynne, lead guitarist Jacobi.e, and drummer Josh Trevizo. Outside of Londynne’s Falling, the members have all been working within the music industry as artists, musicians, writers, and producers for upwards of 6 years, spanning a variety of genres from Pop to Hip-Hop to Jazz and everywhere in between. This culmination of experience gives Londynne’s Falling an edge of modernity and creativity not often found within bands of their respective genre.
IG - @londynnesfalling 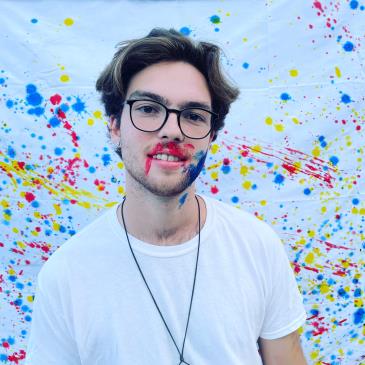