What would a Friday be without booming bass and filthy dubstep? Definitely not a CONTROL Friday! Luckily, CONTROL has got you covered with yet another night full of dubstep sounds, featuring none other than Trollphace and Decadon at AVALON Hollywood on Friday, April 19th.

Trollphace is a key contributor to the dubstep genre. His sound definitely gives way to the darker side within the bass genre. He has released music on Skrillex’s OWSLA and appeared on numerous Never Say Die and Black Label compilations in addition to releasing many other singles and EPs.

Decadon comes from a rock background as he is a professional guitarist in addition to being a bass music producer. He is notable for his performances which incorporate his live guitar sounds. The combination of the two creates a grimy and unique masterpiece consisting of hardcore guitar riffs and filthy dubstep basslines.

Make sure to join us on Friday, April 19th at AVALON Hollywood for this edition of CONTROL Friday! Tickets are available now. Get ready for your weekly dose of bass and dubstep as brought to you by Trollphace and Decadon. 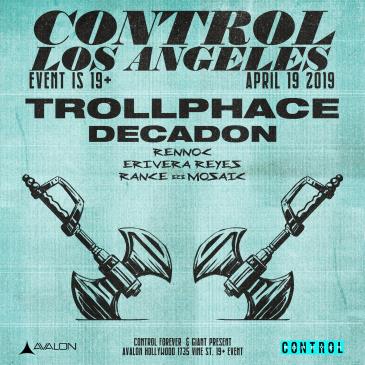