DOORS 6:30pm • SHOW 7:30pm
They're a Bluegrass ensemble with a rock 'n roll heart ready to get you up and honky tonkin' like your mama taught you! In kinship with Tyler Childress, Sturgill Simpson, and other purveyors of authentic country sounds, Town Mountain are a rock solid live act you must catch as they grace The Sanctuary stage October 21st. Cruz Contreras (The Black Lillies) and wife Molly will make our hearts glad as they get the night started.
Raw, soulful, and with plenty of swagger, Town Mountain has earned raves for their hard-driving sound, their in-house songwriting and the honky-tonk edge that permeates their exhilarating live performances, whether in a packed club or at a sold-out festival. The hearty base of Town Mountain's music is the first and second generation of bluegrass spiced with country, old school rock ‘n’ roll, and boogie-woogie. It's what else goes into the mix that brings it all to life both on stage and on record and reflects the group's wide-ranging influences – from the Grateful Dead's Jerry Garcia and the ethereal lyrics of Robert Hunter, to the honest, vintage country of Willie, Waylon, and Merle. The Bend Bulletin’s Brian McElhiney says Town Mountain, “has serious country and rock ’n’ roll DNA.” Town Mountain features guitarist and vocalist Robert Greer, banjoist Jesse Langlais, mandolinist Phil Barker, fiddler Bobby Britt, and Zach Smith on bass.
Multi-instrumentalist, vocalist, songwriter, and producer, Cruz Contreras has roots in Tennessee and Michigan but has impacted Americana music worldwide. Contreras is the frontman, founder, and driving force behind The Black Lillies’ raw and rootsy sound, and will be performing as a duo with his wife, Molly Contreras.
Food will be available from Saltys Lobster & CO. 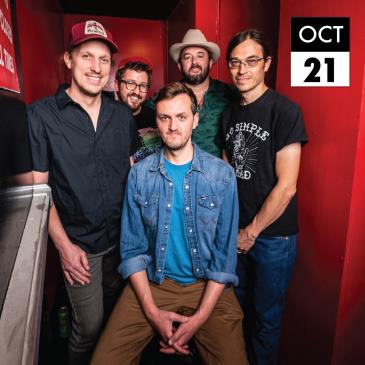