Thy Art Is Murder

Thy Art Is Murder Decade of Hate Tour with special guests Kublai Khan TX, Undeath, I AM and Justice For The Damned

Privatized prisons enforce police states, where nonviolent offenders languish for decades. Pharmaceuticals numb the mind. Social media distracts the spirit. All while the very planet lurches toward an inevitable climate disaster that will extinguish humanity. The Nightmare of Human Organ Harvesting? That’s not a gruesome song title from some forgotten old-school death metal record. It’s a headline from the Wall Street Journal.

Against this backdrop of postmodern dystopia, chaos, and confusion, arrives Human Target, the earth-scorching fifth album from extreme metal titans THY ART IS MURDER.

Australia’s most brutally alarming cultural export since George Miller’s Mad Max franchise makes music that serves as a loud last gasp against the ever-encroaching void. It’s a blazing light of nihilistic despondency before the final darkness. Fusing authentic crushing death metal with blackened fury and flashes of knuckle-dragging stomp, THY ART IS MURDER exorcise the pangs of mortality and the pains of socio-political trauma.

It’s a reinvigoration and redefinition of a thriving subculture that has earned them a place in the Top 50 Most Popular Metal Bands Right Now, According to the Internet, a list compiled by a popular metal blog (based on worldwide page views) that puts THY ART IS MURDER among Metallica, Slipknot, Slayer, Megadeth, Ghost, and Iron Maiden.

THY ART IS MURDER’s thinking-person’s blackened death metal has challenged and inspired audiences around the globe, from top-tier genre festivals like Download, Graspop, Hellfest, and Summer Breeze; to high-profile tours supporting Killswitch Engage, Parkway Drive, and Architects; to multiple headlining and co-headlining shows. In their native country, they’ve charted higher than any other homegrown extreme metal band. They even toured North America with Slayer as part of Rockstar Mayhem.

THY ART IS MURDER continues to rail against the anti-intellectualism and fear of mortality at the heart of some of the worst of public policy. In contrast with their impressive back catalog, no song on Human Target singles out organized religion or the concept of God specifically. The title track is about the practice of organ harvesting in China, where the World Heath Organization found a huge discrepancy in the number of organs volunteered by donors and the number of organs transplanted into the wealthy.

“Make America Hate Again” isn’t intended to alienate any of the leftist band’s more right leaning audience members; it’s an attack against the entire political system, satirizing the expectation that any government will make things “great” for the masses.

“New Gods” is about the role of social media in the mental health epidemic. “Death Squad Anthem” champions the youth who are fed up with the current system. “Atonement” is both a brutal examination concerning the truth of sexual violence, most of which goes unreported, and a literal atonement of sorts for some of the band’s less thoughtful lyrics, around the time of the original lineup’s formation a dozen years ago.

“Welcome Oblivion,” inspired by a line from the late Christopher Hitchens’ Mortality, likens humankind to a “cancer” upon the planet. “Eye for an Eye” subversively ascribes a patient vengeance to the earth, an earth that will survive the “cancer” of humanity. “Voyeurs into Death” attacks the surveillance state and for-profit-prisons. “Chemical Christ” is about the religion of addiction, from pharmaceuticals to “smart” phones.

The fifth full-length from THY ART IS MURDER follows the blistering Dear Desolation (2017), which debuted in the Top 100 in the US and Australia’s Top 5. They continue along an evolutionary trajectory charted by The Depression Sessions, an unprecedented collaborative album with The Acacia Strain and Fit For An Autopsy. That project arrived after the uncompromising Holy War (2015), Hate (2012), and The Adversary (2010).

A fresh generation of extreme music acolytes and longstanding death metal fans alike enthusiastically endorse the unrelenting aggression and increasing lyrical depth of THY ART IS MURDER. Videos for “Puppet Master,” “Holy War,” “No Absolution,” “The Purest Strain of Hate,” “Shadow of Eternal Sin,” “They Will Know Another,” and  “Light Bearer” have accumulated 40 million views, 13 million of them for “Reign of Darkness” alone.

If this is truly the soundtrack to the end of humanity, it’s music that should unite and empower extreme metal fans in all corners of the genre. This is underground music for the people, carrying the torch for a primal style that doesn’t die. As New Noise declared, “few embrace the feel of the apocalypse so dearly and expertly… THY ART IS MURDER is clearly at the head of the modern death metal pack [and] they are just getting better.” 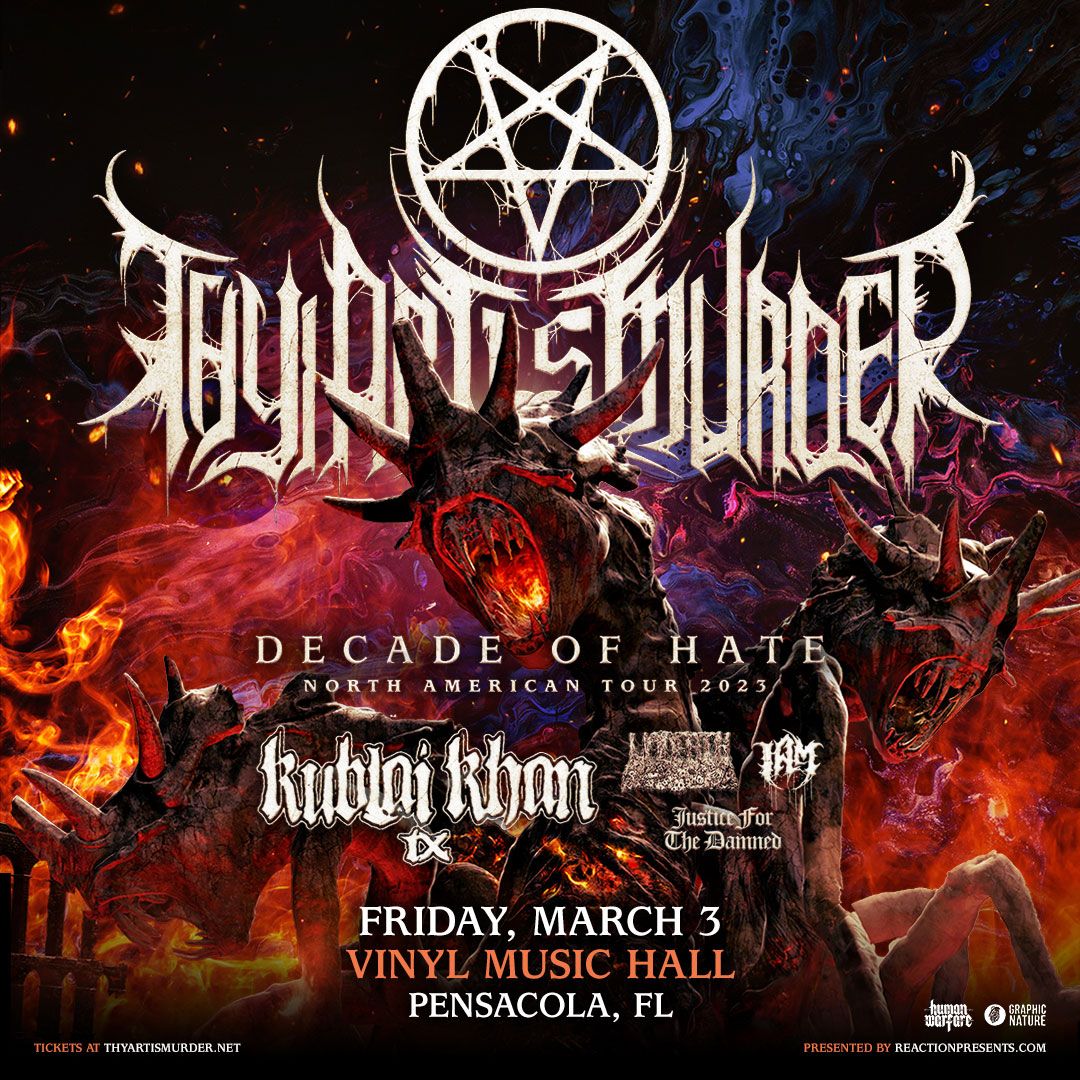 Thy Art Is Murder

Kublai Khan TX / Undeath / I AM / Justice for the Damned