The New Jersey sextet who releasedsix records, since their formation in 1997 and enjoyed cumulative worldwidesales of over three million units before disbanding in 2011 originally reformed(at two day’s notice) in 2016 to play the Sound on Sound Festival in Atlanta,although in typical Thursday fashion, it was the charitable element oftheir performance that enticed them and not the almighty dollar. Aftertriumphant appearances at Riot Fest in Denver and Chicago, 2016 wastopped off with magical (sold out) home coming shows at their spiritual home ofThe Starland Ballroom in NJ.

In 2017, the band undertook a successful 24 dateheadline tour of the USA with Touche Amore and Basement in tow,as support. Never afraid to wear their hearts (or their politics) on theirsleeves the band crisscrossed the USA performing under two side banners thatread ‘Refugee’s Welcome Here’ and 'Protect Immigrant Communities’in open defiance of the atrocious politics facing their immigrant brothers andsisters. This outspoken stance is not surprisingly garnered both controversyand respect, two notions long synonymous with Thursday.

Don’t call it a comeback and don’t call it nostalgia, the band’s singerGeoff succinctly summarizes their reunion:

“‘This coming year, we are going to take theshow outside of North America and play all the countries that embraced us sothoroughly "back in the day." You can probablyguess a few of them.

The problem with nostalgia, and memory in general, isthat it's a destructive process. Much like recording over the same cassette,again and again, the quality degrades with each pass. Put in a modern way, ourmemory is like a hard drive: the more you try to fit on it, the further itcompresses, lowering the quality of the new memory and the original experience,too.

Rather than endlessly overwriting the original experiences that weshared with so many of you, we've been discussing how and when to wrap up thistrip down memory lane. In the next year, we'll be announcing our internationaltours as well as a final group of dates in the US, that will be totally unlikeanything we've ever attempted to do.

Beyond that, we will only return in the event of new music. And newmusic will only come if we feel it's truly inspired and adds a new dimension tothe band. In our humble opinions, there are only a few bands that have put outrecords worth coming back for. Bands like Portishead and MBV. 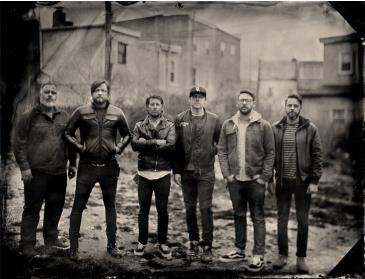