Jack coined the term “tropicalhouse” three years ago in jest, but it was evident he was on to something whenother up-and-coming artists latched onto the label. What once began as aninside joke became a brand, as he launched a mix series podcast in itsnamesake—which to date has accumulated over 24 million streams—alongside aspate of remixes for One Republic, Of Monsters & Men, and Gabriel Rios; andoriginal tracks such as “Symphony,” “The Final Speech,” and his debut single“Rivers,” which has earned over 50 million streams on Spotify. His performancesat major festivals such as Coachella, Outside Lands, and Ultra Europe, as wellas an all-tropical house tour—the first of its kind—bring endless summer to allparts of world, no matter what time of year.

Finding kinship in Jack’staste-making spirit was none other than consummate curator Pete Tong, who hastaken the young Aussie under his wing as a mentor, telling Billboard, “Hereminds me of myself.” Last year, Tong signed him to Parlophone Records, whichis home to his FFRR imprint. Since then, Jack has followed in the dance icon’sentrepreneurial footsteps by curating stages at Electric Zoo and TomorrowWorld.

As tropical house continues toshine in the spotlight, Thomas Jack is now looking past it in an effort toexpand his horizons; recent club sets lean more toward an eclectic mix ofvarious sub-genres of house that some fans have never heard before. What hedoes next, one would be wise to pay close attention, for dance music’s nextcraze won’t be too far behind. 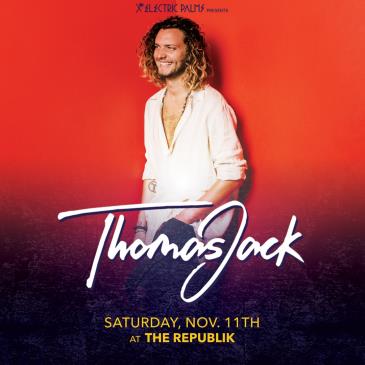