THE WARNING infuse rock music with a much-needed shot of adrenaline.  The Monterrey, Mexico trio of sisters – Daniela “Dany” [guitar, lead vocals], Paulina “Pau” [drums, vocals, piano], and Alejandra “Ale” Villarreal [bass, piano, backing vocals] – charge forward with head-spinning riffs, unpredictable rhythms, stadium-size beats, and skyscraping vocals.  They stand out as the rare presence equally at home on network television and on stage at Heaven &Hell Festival.  If anybody can usher rock’s comeback along, it's these three ladies.  After exploding online with one viral moment after another, THE WARNING parlayed this momentum into a series of independent releases, including Escape the Mind EP [2015], XXI Century Blood [2017], and Queen of the Murder Scene [2019].  They graced a stacked bill at Mother of All Rock Festival as the only Mexican band and opened up two sold out Monterrey shows for The Killers and for Def Leppard in Mexico City and Guadalajara.  After quietly amassing over 120 million YouTube views and 10 million streams, they surge to the forefront of hard rock on their LAVA Records single debut, “CHOKE”, out spring 2021. 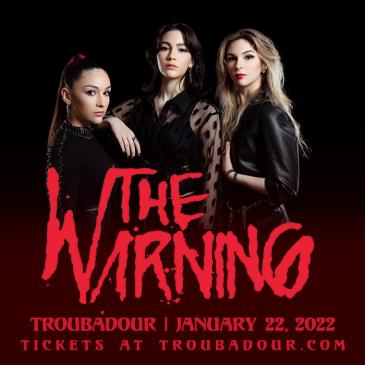