The Strike is a 5 member independent band based in Los Angeles, CA.  The band is headed by front man Chris Crabb and supported by Alex Palazzo -guitar, David Maemone - keys, Frank Ojeda-bass, and Jay Tibbitts-drums.

The Strike released their debut album "Faint of Heart" in June of 2017, which was met with great enthusiasm nationally. The success of the record allowed them to expand their presence into Los Angeles from the greater Mountain West region where the band began.

The Strike is known for their captivating live performances. In an age of musical minimalism, The Strike is reminiscent of rock bands from the 70's and 80's. They feature true showmanship in an age where the art of performance has been forgotten. Chris Crabb's vocal style is akin to rock vocalists such as Lou Gramm, or Steve Perry. The band members are all students at their craft. Those who attend Strike shows become instant fans.

Sub-Radio makes indie pop that grooves, stabs, winks, punches, inspires. Founded by six childhood friends, they built a worldwide following on the strength of ecstatic virtual and live shows and a stream of releases. Following the release of their 2020 EP Thoughts Lights Colors Sounds, produced by Andrew Maury (Shawn Mendes, Lizzo, COIN), the band embarked on a pandemic-induced virtual Reddit tour, reaching over 4 million unique viewers in just 5 months. Their latest single “What You Want To Hear”, debuting in February 2021, is a pop blast of love and compassion in the face of adversity. 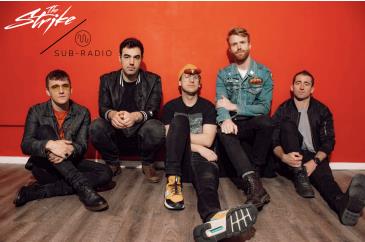