In nature, wildflowers signify freedom. Nobody plants them. Rather, they blossom on their own. The same could be said of The National Parks. Since emerging in 2013, the Provo, UT quartet — Brady Parks [guitar, vocals], Sydney Macfarlane [keys, vocals], Cam Brannelly [drums], and Megan Parks [violin] — has quietly grown into an independent phenomenon with roots embedded in blissful pop, cinematic electronics, organic orchestration, and rock energy. Racking up over 90 million total streams, selling out headline shows on tour, and acclaimed by NPR, Paste, Atwood Magazine, PopMatters, and more, the group bloom like never before on their aptly titled independent fourth full-length, Wildflower.“It was an umbrella theme for the album, because we feel like wildflowers in the whole landscape of music,” states Brady. “We do what we want to do, and nothing will stop us. All of these songs fit into our aspirations to grow and dream big. We wrote with a lot of heart. We didn’t chase any trends. We tried to create something beautiful, epic, and true to us. This is who we are.”
Over the past seven years, they also diligently worked towards making such a statement. As the story goes, Brady performed at open mics as a singer-songwriter around Utah and often hosted a show at his apartment complex. Sydney attended one of these homey gigs and reached out to jam shortly after. Right off the bat, the musicians recognized they found “a match made in heaven.” After meeting via mutual friends, Megan joined the fold—and eventually married Brady!The National Parks introduced itself on 2013’s Young, staking out a spot in the Top 15 of iTunes Top Singer/Songwriter Albums Chart. A year later, the filmmakers of Love In The Tetons tapped the band to pen a companion single for the film. Their contribution, “As We Ran,” not only amassed over 12 million Spotify streams, but the first month of its proceeds benefited the National Parks Conservation Association. Following the release of Until I Live in 2015, Salt Lake City Weekly proclaimed them Utah’s “Band of the Year.” Joined by Cam behind the kit, they unveiled Places in 2017. Securing coveted placements on Spotify’s Pop Chillout, Indie Pop and Morning Commute playlists, the record yielded a series of fan favorites, including “1953” [2.8 million Spotify streams] and “Lights in the City” [1.1 million Spotify streams]. Along the way, The National Parks packed headline gigs, toured with Andy Grammer and Peter Bjorn and John and performed everywhere from KAABOO Del Mar and SXSW to Snowmass Mammoth Fest and Oyster Ridge Music Festival.
On the heels of Places, The National Parks kicked around initial ideas for what would become Wildflower. This time around, Brady simply “sat down with a guitar and let whatever was inside come out without worrying if it was catchy.” Allowing inspiration to take its course he wrote “for a cathartic emotional release, rather than chasing a sound.”“That’s why I feel like it’s the best writing I’ve ever done,” he admits. “I let myself do what comes naturally. It’s a fresh start. At this point in our career, we wanted to show the world we can do a lot of different things. We pushed ourselves instrumentally. It isn’t just acoustic guitar or piano on every song. There’s a lot of variety, but we’re not pursuing trends. We focused on songwriting. We narrowed in and created a sound that is The National Parks.”Produced by longtime collaborator Scott Wiley, the sound unfurls on the first single and title track “Wildflower.” A steady arena-size beat reverberates underneath Brady’s soaring vocals backed by a harmony from Sydney. Distorted electric guitar elevates the hypnotic hook — “I could be your wildflower” — before the whispered bridge pours into an ecstatic riff.“It’s probably the most rock ‘n’ roll song we’ve ever done,” says Brady. “It was fun to step into a new energy. Lyrically, it’s about chasing our dream. We don’t fit into a certain mold, but we belong under the open skies and vast world.”On “Time,” warm acoustic strumming wraps around a glitchy electronic beat as Brady and Sydney share verses before an emotional hook that urges “having patience and perseverance through struggle.” Meanwhile, the folk instrumentation of “Waiting for Lightning” gives way to a sunny chant “about putting yourself out there and waiting for your chance.” Maintaining the momentum, “Horizon” relays a story of “getting lost in the forest, but chasing a flickering light on the horizon, like a dream.”
Then, there’s “Painted Sky.” The track’s expansive soundscape evokes a Spaghetti Western- soundtrack and illuminates the sonic adventurism at the heart of the music.“It’s got those over-the-top western vibes,” affirms Brady. “Sometimes, everything will be good, but you get lost under the ‘Painted Sky’. Things aren’t as great as you portray them or really want them to be. It’s about the journey.”In the end, The National Parks follow a muse of creative freedom to the fruition of a dream.“I’d love for listeners to be uplifted by the album and maybe inspired in some way,” he leaves off. “There are a lot of personal experiences in the record. I hope you walk away feeling the heart of it and The National Parks.” 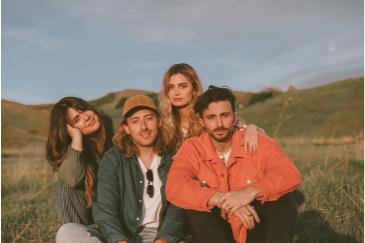