The sixth full-length from The Menzingers, Hello Exile arrives as the follow-up to After the Party: a 2017 release that landed on best-of-the-year lists from outlets like Clash and Noisey, with Stereogum praising its “almost unfairly well-written punk songs.” In creating the album, the band again joined forces with producer Will Yip (Mannequin Pussy, Quicksand), spending six weeks recording at Yip’s Conshohocken, PA-based Studio 4. “That’s the longest amount of time we’ve ever worked with Will,” notes Barnett. “We wanted to make sure these stories didn’t get lost in the music, so we kept it to a lot of room sounds with the guitar and bass and drums.”

Despite that subtler sonic approach, Hello Exile still rushes forward with a restless urgency—an element in full force on the album-opening “America (You’re Freaking Me Out).” With its pounding rhythms and furious guitar riffs, the viscerally charged track provides a much-needed release for all those feeling frenzied by the current political climate. “We’re living in a pretty insane time, where all you can think about every single day is ‘What the hell is going on with this country?’” says Barnett. “But as I was writing that song I realized that it’s kind of always freaked me out, especially coming-of-age during the Iraq War. I love so much about America, but I think you can’t deny that there are some people in power who are absolutely evil.”
Elsewhere on Hello Exile, The Menzingers turn their incisive songwriting to matters of love and romance, exploring the glories and failures of human connection. A wistful piece of jangle-pop, “Anna” paints a portrait of lovesick longing, complete with dreamy recollections of wine-drunk kitchen dancing. And on “Strangers Forever,” the band shifts gears for a searing tribute to parting ways, backing their spiky guitars with brilliantly barbed lyrics (e.g., “Maybe it’s for the better if we both stay strangers forever”).

An album fascinated with home and displacement and belonging (or the lack thereof), Hello Exile takes its title from its heavy-hearted centerpiece. With its aching vocals, graceful acoustic guitar work, and beautifully lilting melody, “Hello Exile” draws inspiration from Anton Chekhov’s “The Lady with the Dog” (a short story set in the Black Sea resort city of Yalta). “I grew up in a tiny town that’s essentially a cross between a summer-vacation spot for New Yorkers and a retirement home, so for most of my childhood there were always people coming in and out of my life,” says Barnett, who hails from Lake Ariel, PA. “Reading that story made me think of how isolating it felt when my friends would leave to go back to the city at the end of the season, and I’d still just be stuck way out there in the woods.”

In looking back on the songwriting process behind Hello Exile, Barnett points to the starkly confessional “I Can’t Stop Drinking” to illustrate the band’s commitment to total candor. “We’ve written so many songs about fun times with alcohol—but the older you get, it’s not always fun anymore,” he says. “With ‘I Can’t Stop Drinking,’ I wanted to be completely truthful and get away from glorifying anything. Sometimes it’s tough to look at yourself and at others that way, but it felt important to make it as real as possible.”

With the band achieving that soul-baring intimacy all throughout the album, Hello Exile emerges as The Menzingers’ most emotionally daring work to date. “We’ve always been in love with good songwriting and the beauty of taking a song to its fullest potential, but with this album I feel like we’re really becoming the band we’ve always wanted to be,” says Barnett. Not only a creative turning point for The Menzingers, that uncompromising honesty helps fulfill their mission of leaving each listener with a potent sense of solidarity. “A lot of these songs are looking at different life challenges—they’re stories of people at some sort of crossroads,” Barnett says. “We might not have the answers for anybody, but hopefully the songs will help them to see the light at the end of the tunnel, and know that they’re not alone in whatever tough decisions they’re facing.”

Summed up in one word, Worriers’ new record You or Someone You Know is relatable. It’s an ambitious, big rock record that dares to push the genre forward. It’s not only the music and singer/songwriter Lauren Denitzio’s (they/them) voice, which calls to mind the late Delores O’Riordan of The Cranberries, but also the subjects they tackle in their lyrics. The themes are universal - love, loss, fear of the future - but when written from Denitzio’s perspective, they create a narrative that adds depth to stories traditionally told around those themes and makes space for a diverse array of identities. “I’ve been identifying with music by straight cis men all my life,” Denitzio explains, “I have people come up to me all the time after shows and tell me things like ‘I know you’re not speaking to my demographic but I really like your music.’ But just because I’m speaking from my perspective doesn’t mean it’s not for you.”

Their statement rings especially true on You or Someone You Know - there’s something every listener can relate to when listening to the album. “It’s about wanting to build a life for myself when it feels like the world is ending,” Denitzio says, “Building a life where I’m reconstructing my relationships to everything and everyone.” Deeply rooted in their own experience, the album chronicles a period in which Denitzio’s life was turned upside down after splitting with their partner, who played guitar on the last two Worriers records. The dissolution of their relationship was the catalyst for a sonic change in the band, and a cross country move from Philadelphia to Los Angeles for Denitzio. The combination allowed them space and opportunity to start anew.

On the album, Worriers confront society’s relationship hierarchies - that heteronormative relationships are the standard to which all people should aspire, that couples somehow rank above singles, the idea that marriage is the ultimate legitimization of love. Ideas that are rarely overtly stated or talked about, beliefs that people never even realize that they carry, but that are so deeply ingrained in our cultural norms that they infect our relationships to everyone and everything. “I think a lot of the album is about having sympathy for myself and everyone in my life, understanding that feeling of desperation when you’re trying to navigate the world right now,” Denitzio explains.

The record’s themes of reconstructing and reexamining relationships touches on how they play into the current zeitgeist. “I thought a lot about how the state of the world makes any sort of partnership stressful. The album is partially autobiographical but it’s also addressing more universal questions that people have to ask these days. Do we have kids? Do we move to a place that could be underwater in 20 years? How does having no idea how you’ll ever retire affect planning your future?”

Sonically, the new album does an incredible job of reflecting these anxieties and the massive shifts for Denitzio and the band over the past year. Worriers added guitarist Frank Piegaro, who recorded You or Someone You Know with Denitzio and longtime drummer Mikey Erg and bassist Nick Psillas. To help capture the band’s fresh sound, Denitzio recruited veteran producer John Agnello, best known for his work with some of indie rock’s most influential acts such as Sonic Youth, Kurt Vile, Alvvays, Dinosaur Jr., and Hop Along. Agnello recorded with Worriers over 11 days in Jersey City, NJ at Kaleidoscope Sound and in Brooklyn, NY at Russell Street Recording. Unlike their previous releases, 2015’s Imaginary Life (Don Giovanni) and 2017’s Survival Pop (Side One Dummy/reissued by 6131 Records), the band recorded the majority of the album live in the studio, working with material from demos they had sent back and forth in the months leading up to recording. “John was such a cheerleader throughout the whole process. His unwavering support and enthusiasm really helped shape the record,” Denitzio says.

With the help of Agnello and their bandmates, on You or Someone You Know, Denitzio has created a rock epic for these times, imbued with heart that is felt throughout the album. Embracing the feeling of precarity that has become a familiar and constant facet of contemporary life, the songs are bound to resonate with listeners in these times. “You never know what’s going to happen, and I think the content of the songs reflect that. In Los Angeles, it’s sunny all the time and beautiful but there’s fire and earthquakes and rising sea levels. Our songs often sound upbeat and happy while being about difficult or dark topics, so I’m not surprised I’ve ended up out here.” 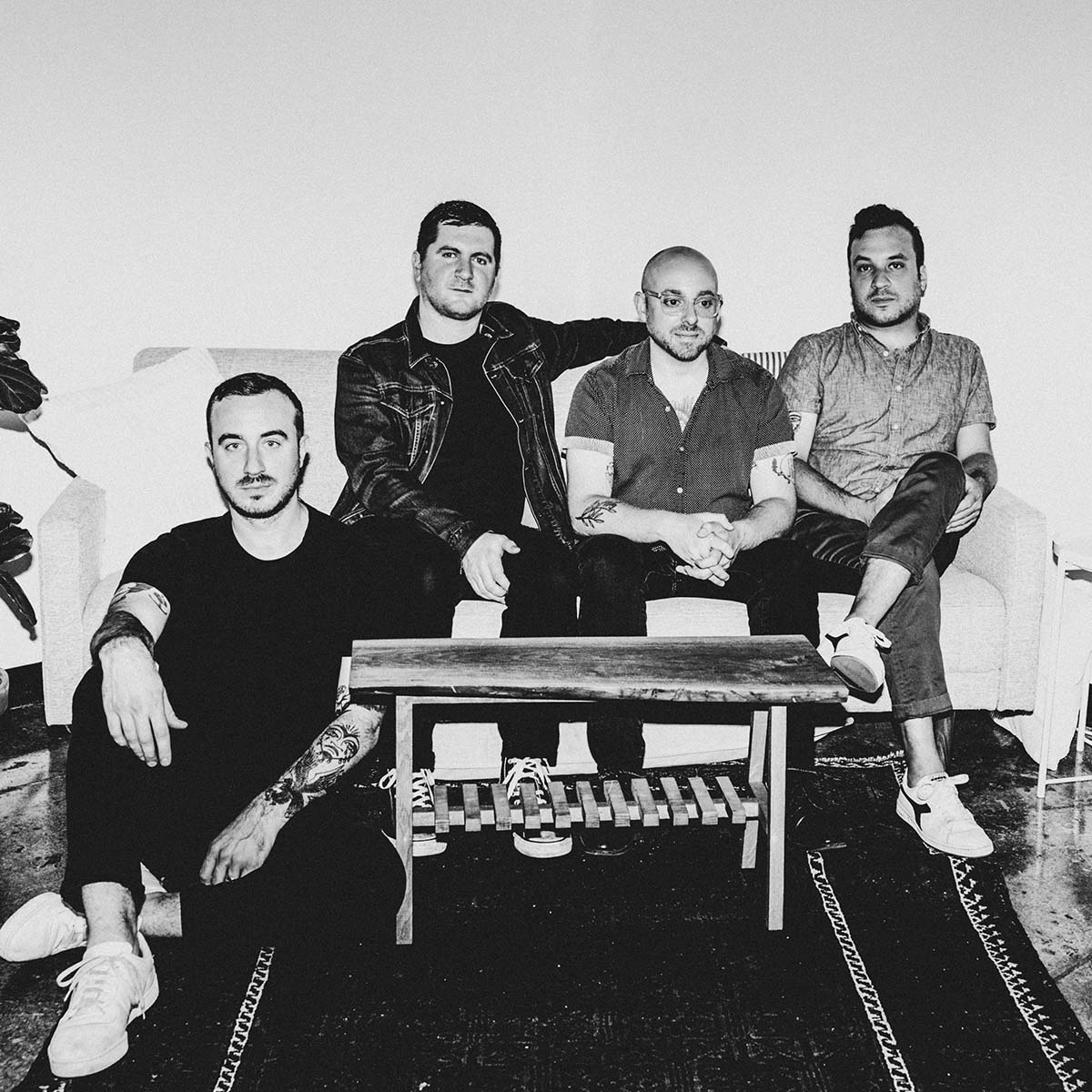