The EC Twins at Ameristar 2/23

For our third event in the Nightclub at Ameristar series, we are once again bringing a new act that has never performed in St. Louis.  Headlining this event on Saturday, February 23, will be the one and only EC TWINS.  Providing additional dj support will be Arty J fresh off his performance in Miami for the McDonald's Flavor Battle, and local favorites D-Mega and Permafrost.

EC TWINS
Born and raised in the musically historic city of Manchester, England, Marc and Allister Blackham, also known as the EC Twins, began their career in the House Music scene in Edinburgh, Scotland at age 16. They quickly evolved from “flyer boys” to creating and running the city’s most successful night club: Eye Candy. The Twins excelled, drawing in crowds night after night continually packing Eye Candy beyond capacity. The initials of the infamous nightclub stuck as the brothers are still known around the world as simply… EC Twins.

The Twins began their musical career by performing in small clubs and funneling all of their limited finances into their music and performances. Their hard work paid off, turning their local fan base into a huge army of dedicated worldwide followers. Thanks to their “British Invasion", The Twins have been credited as 2 of the most influential figures responsible for the boom of Electronic Music in the USA.

For $15 advance tickets and VIP table reservations go to flavourus.com/ectwins or groovetickets.com
Event is 21+
VIP packages are $475 and include 8 VIP admissions, a table in the main room, 1 liter bottle of Grey Goose and mixers, and tax & gratuity
Doors open at 9:00pm and party goes until 2:30am
For questions contact kerry@partystarevents.com 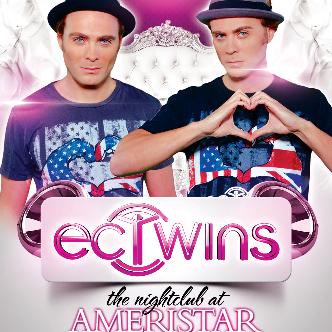