The Dirty Nil at Underground Arts

21+
﻿
﻿PLEASE NOTE:  Attendees must provide print or digital proof of vaccination to attend this event. Masks will also be required inside the venue when not eating and drinking. For more information on our health & safety policy, click HERE﻿

About The Dirty Nil

It’s been a hard year’s decade. At this point, 2020 is a leading contender for Worst Year of the 2020s: A global pandemic, raging wildfires, mass unemployment, authoritarian violence in the streets, an uncommon amount of racist assholes with mainstream-media platforms—and sure, let’s throw killer hornets into the mix, too. These are the sort of unprecedented times that inspire artists to look inward, take stock of our current condition, and produce topical works of great importance that will unite and inspire an emotionally distressed population. Alas, we regret to inform you that, on their third album, Hamilton, Ontario-based power trio The Dirty Nil have done none of these things. This record features no songs about isolation, imminent apocalypse, or the triumph of the human spirit in the face of adversity, however, there are tunes about dysfunctional relationships, getting your bike stolen, idiots on the internet, the anxiety of entering your 30s, and listening to Slayer in your Dodge Caravan because you’re overcompensating for turning into a soccer dad. In other words: all the shit you were worried about before you started Googling the words “viral load trajectory,” and all the shit that’ll still be weighing on your mind long after you can start coughing in your friends’ faces again without fear.

But while this record features no songs that immediately timestamp it to the year 2020, it nonetheless qualifies as a work of pure quarantine-core. When singer/guitarist Luke Bentham, bassist Ross Miller, and drummer Kyle Fisher first convened in Toronto’s Union Studios with Seattle-based producer John Goodmanson (who commandeered the Nil’s 2018 Juno Award-nominated crusher, Master Volume), the coronavirus had just begun its North American tour and talk of border closures started creeping into the headlines. Suddenly, what was supposed to be a leisurely recording process became a tense, do-or-die mission.

“It was a really strange atmosphere,” he continues. “We were just trying to have fun and insulate ourselves from the bad news. But it got to the point where, just after we finished the drums and the bass, John had to fly back to Seattle, or else he was going to be stuck in Canada. He made the last flight out. Then, the studio engineer Darren McGill turned to me and said, ‘We have to close the studio in two days.’ So I had two days to record all of the guitars for the album, which typically takes a week or two. We subsisted on pizza pockets and soda water and coffee for two 16-hour stretches.”

Left with the decision of whether or not to continue the record, the band opted to finish remotely by sending things back and forth rather than pressing pause. Bentham began the process of going to TAPE Studio every Monday, Wednesday and Friday night to record his vocals – the only time he would leave the house. Each session started after engineer Adam Bentley had thoroughly sanitized the studio. Bentham, Bentley and fellow TAPE engineer, Jordan Mitchell, individually quarantined for the month of April to ensure they remained healthy throughout the process.

Working on the record quickly became the only respite from the storm cloud of the apocalypse as it continued thickening on the horizon.“It was the one thing we had control over while humanity was powerless,” Bentham recalls. “It became a time where we could crack open a couple cans, play some tunes, and focus on what it was we actually could do – which was make the greatest rock ‘n’ roll record of all time. It was just the most insane, crazy, ramshackle putting-together of an album that I’ve ever had to do. I was just a wreck physically and mentally. When I heard the first mixes back, I almost cried because I was so happy.”

But if the record was birthed in a pressure cooker, the impetus for its beautifully blasphemous title—Fuck Art—stems from the most placid, un-punk environment ever: a community painting class in the band’s hometown of Dundas, Ontario, where Bentham found himself last winter after his mom gifted him the painting lessons as a Christmas gift. However, that idyllic small-town scene was soon disrupted by a cantankerous septuagenarian in the back of the class who, for a brief moment, effectively became the honorary fourth member of the band.

“Our teacher was showing us how to do something really basic, like paint a sky,” Bentham recalls. “And this older guy in the back was like, ‘hey, mine doesn’t look like that!’ And then, ‘I got a brush-hair stuck in my painting!’ And then ‘mine doesn’t look like everybody else’s!’ And the teacher goes, ‘well that’s the beauty of art—you’re just going to explore and find yourself.’ And there’s this long silence and I just heard him say, ‘fuck art.’ This 72-year-old dude was basically having a tantrum! It was kind of an eye-opening experience, because I had this myth in my mind that, at some point, everybody gets their shit together. But seeing this old guy complain reminded me that, ‘oh, no—not everybody gets a grip on life.’ I couldn’t stop thinking about it. After I told my mom it was going to be the album title, she left two different messages on my answering machine trying to convince me to change it.”

Not that it would’ve put Luke’s mom any more at ease, but, truth be told, this album could’ve easily been called Fuck Facebook. Like any rational-thinking sentient beings alive in 2020, The Dirty Nil are obviously deeply concerned about the state of the world, but they’re exhausted by the relentless online discourse surrounding it, and how the 24/7 shitstream flooding your smartphone makes you numb to the very issues you’re supposed to care about.

As Bentham explains, “A lot of the feelings that I had going into this record—and which are represented in some of the songs—had to do with getting really tired of seeing people riding up on their high horses, especially online, and commanding other people what to do, and saying terrible things about people who aren’t instantly complying with them—you know, the complete pompousness and posturing of being online. I was around for the advent of social media, and I think there’s a universal agreement that this is the worst that social media has ever been. It’s never been this toxic and fucking depressing—it’s a flaming garbage fire every day. And yet our lives are kind of dependent on it.”

You can hear that frustration bubbling up and boil over on Fuck Art’s emotional centerpiece, “One More and the Bill,” a grungy drinking song that climaxes with a vow to “smash my TV, smash my phone, leave politics alone, go outside for a while.” Even a seemingly sincere declaration like “Done With Drugs” is less a personal affirmation than a social critique—the song isn’t so much about sobering up as the performative aspects of self-care that often play out on social media.

But Fuck Art is also a statement of confidence and defiance from a group that’s now three albums into the game—i.e., the point where ambitious rock bands are supposed to call in the orchestra, experiment with electronics, and try to make their Ok Computer. The Dirty Nil, by contrast, have opted to perfect the formula that, over the past decade, has landed them on stages with everyone from Against Me! to The Who. Fuck Art melts down all of their favorite ingredients—classic-rock heroism, pop-punk horsepower, ‘80s indie scrappiness, ‘90s alterna-crunch, speed-metal adrenaline—into a radiant, chromatic solution they can then mould and harden into unpredictable shapes.

After all, few bands could pull off a bait-and-switch as masterful as “Doom Boy,” where a thundering thrash intro clears the runway for an ascendant power-pop anthem that name-checks The Cro-Mags and Turnstile. Bentham rocked so hard during the song’s recording (trying to make Fisher and Miller laugh with his crabcore moves) that he quite literally had a blowout – “I have the pants to prove it!” Likewise, what other group would think to cap a swaying, Blue Album-worthy sing-along like “Damage Control” with a death-metal roar (“that’s Ross,” Bentham confirms, “he’s the king of the flaming-rooster scream”), or craft a love song in the key of Mötörhead (“Ride or Die”). But beyond flexing the Nil’s metal muscle more vigorously than before, Fuck Art reasserts the Nil’s uncanny knack for fusing mosh-pit-stoking energy with melodies that effortlessly soar above the melee, as heard in the adrenalized “Done With Drugs,” the swaggering Cheap Tricked knockout “Elvis ‘77,” and the open-sunroof rush of “Jealousy,” which isn’t an intentional callback to The Gin Blossoms’ “Hey Jealousy,” but would sound right at home tucked between it and a latter-day Replacements cut on an early ‘90s college-rock radio show.

“I think we have a pretty distinct knowledge and understanding and comfort about what we do,” Bentham says. “I’m proud of the job that we’ve done between expanding ourselves and our efforts to navigate the modern landscape as much as possible. But we’ve never ever sacrificed the core elements of our sound. We have a thing, and we’ve never compromised it, even though at times we faced a lot of external pressure to do so.”

And hey, why not double-down on that uncompromising ethos by giving your most radio-ready album to date a title that can’t be uttered on the radio—and which, even in sanitized form (F— Art), still reads as “fart.”

“Before COVID hit, Fuck Art was kind of like a super tongue-in-cheek, snotty title inspired to provoke somewhat,” Bentham observes. “But in the subsequent time that has passed, to me it’s become a title of just celebrating absolute freedom. Ironically, to me, there’s a lot of optimism in it. It’s an absurd title, but it’s also kind of monolithic and simple. There’s also a kamikaze element to it—because there’s a chance that it could limit our commercial potential, but whatever. I don’t give a shit!” 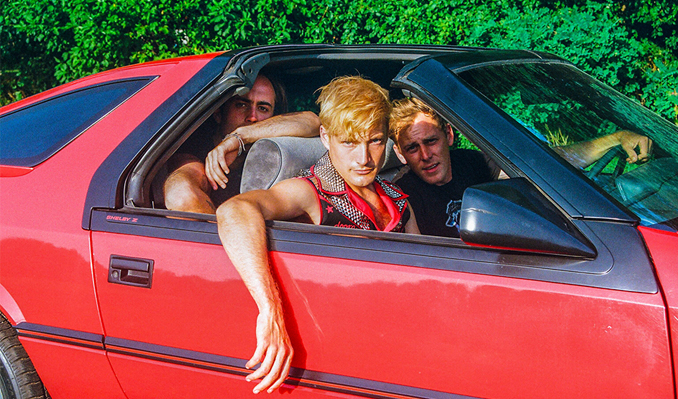