Wise beyond their years and aggressively handsome, these two overachievers are focused on success… Never before has the world seen two furry browed individuals such as these two (seriously they have really bushy eye brows)… As you might have imagined Alex and Drew did not meet on the set of their Vogue Cover shoot while surrounded by super models, but rather somewhere else. Apart from Social Darwinism, the thing that separates these two men from the rest is their unsettling and uncanny ability to discover and create trends. They find the parts of things that people actually give a shit about, whatever they may be, and focus on creating and improving those parts. With live sets and productions that their own mothers describe as, “sounds nice, but a little loud,” these two always put on a show that was not ever described as sexy and life-changing, but should be. Apart from their unique personalities and boyish good looks, they have many similarities. They each graduated from prestigious North-Eastern Universities, they like hot chicks in yoga pants, enjoy a good burger, and have been rejected from many of the venues they now play at.

The Chainsmokers have become the hottest young American EDM DJ duo. Their live shows are becoming the most sought after in EDM. Their wild antics, hilarious personalities, and addicting productions have fans interacting with them non stop and running to see them live every chance they get. Their signature sound has its foundations in Indie, Progressive and Pop Music. On the production front, their original tracks have all reached the Beatport top charts and their remixes always hit #1 on the HypeM charts. They've gotten immense support by friends such as Nicky Romero, Steve Aoki, Pete Tong, Afrojack, Tiesto, W&W, and more. There first major release, #SELFIE, and it's official music video swept the world so look out for much more to come! 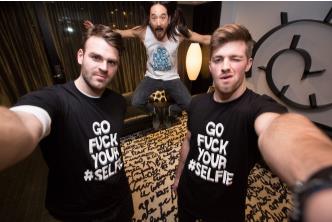