Last year the Buttertones put out Gravedigging, but on their newest Midnight In A Moonless Dream, they’re digging deeper and discovering something dark. If Gravedigging felt like an oversaturated spaghetti-western desertscape, Midnight is much more biting—music made for the swampland that spit out Australia’s mad Scientists, or for the Mickey Spillane night city where the Cramps met all those garbagemen and werewolves. Or maybe the Buttertones are heading for an even more primal place: “Show more teeth / Bite your way in,” sings guitarist Richard Araiza. “You’re back in the jungle again!”

They’d started in 2011 as a trio of music-school misfits. Araiza, bassist Sean Redman and drummer/multi-instrumentalist Modesto ‘Cobi’ Cobiån all wanted to pursue something more than boring industry adequacy, and soon locked together their current five-piece line-up with sax player London Guzman and guitarist Dakota Boettcher. With Gravedigging, they leapt from backyard parties to back-to-back tours, including their first trip to Europe, and scored a Coachella slot for 2018. It was a year that made them sharper, stronger, even more sophisticated. And when they were ready to record, they were ready to do things differently.

Midnight was made in two flash sessions at Long Beach’s Jazzcats studio with Gravedigging producer Jonny Bell, whose genre-smashing record collection and appetite for experimentation made for a perfect match. (He’s really a guru, they say.) What was supposed to be a six song EP during the summer of 2017 bloomed into a full-length by the end of that December. Midnight was like a trust fall, the band says—leap of faith after leap of faith, cut to tape as it happened by a tight and tour-tested band. On this album, they’d decided, everything would be new—not just new sounds, like their first-ever string section, but new ways of working together and writing together. They worked on trust and instinct, by feeling instead of thinking. If it worked, they’d keep it, and if it didn’t, they’d burn it and move on. Gravedigging played like the soundtrack to a good heist movie, but Midnight was like the true story itself—a perfect and intricate crime, executed by a crew of professionals under cover of night.

On the vicious “Winks and Smiles,” the spirit of sax and violence that powered cult-classic L.A. punkers the Deadbeats suddenly comes to life; on the starked-out “You and Your Knife” and fog-and-smoke follow-up “Brickhead,” you’ll hear the cryptic echoes of Suicide or Bauhaus. It’s music made for dancers but also for doomed romancers, and you’ll hear it best on the pocket symphony “Eros,” which closes the album with Lynch-ian vision and power—here Araiza sings with almost startling passion, and if you don’t linger on the idea of graveyard angels in perpetual embrace, it’s a love song for the ages. This is the strong stuff, the kind that comes in an unmarked bottle and burns when it hits.

“It’s the darkness that brings us together,” laughs Guzman—in person, this is a band who prefer comedy to tragedy, even if they do claim to spend hours listening to Smiths records all day. But there’s still a tension and even a sinister new dimension on Midnight that the Buttertones never quite had before. Like lead single “C4,” which ignites like something from a New York no-wave song, with slashing sax and ferocious drums and a piano riff falling of a cliff before Araiza fights through the noise and gunsmoke, and what’s the very first word on the whole album? “Bang!” he shouts—and that says it all. 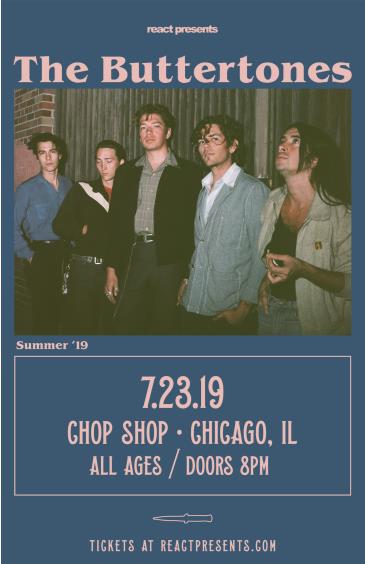