EVENT PRE-SALE IS NOW SOLD OUT. TICKETS ARE AVAILABLE AT THE DOOR ONLY!

Quite remarkably, Grateful Dead music has become its own genre, drawing crowds based on the music itself. Waynard Scheller and Rainbow Full of Sound (RFoS) have become one of the East Coast’s premiere bands playing Grateful Dead songs, thanks to talent and a lot of practice—300 shows’ worth. But this fall’s tour will come with a very special twist: for the second time, they will re-create the Dead’s legendary 1972 tour of Europe, tracing the path of twenty-one shows from England to Denmark to Germany to France to the Netherlands and back to England.

Appropriately, RFoS began as a one-off experiment in 2012 when a gang of Dead Heads decided to play the entire 1980 Radio City Music Hall run. It was so much fun that it took on a life of its own, with a rotating cast that keeps it fresh. The one consistent link is Waynard, and it makes sense—his commitment to music goes back to a ragtime-piano-playing grandfather, hippie babysitters who brought guitars with them, and then a mom who taught him classics like “Heart and Soul.” By the age of 10 he was playing guitar, and after lessons in voice and theory but almost none in piano, he became so consumed by the Grateful Dead’s Terrapin Station album that for close to a year he’d listen to it before going to school. Things were never quite the same afterward. Soon he switched to keyboards and joined his first Dead-oriented band, Changing Planes.

One day he got a call to play a show in a crypt at the Church of the Intercession in Trinity Cemetery, New York City, in the process meeting Zach Nugent (then with Melvin Seals and JGB) and Kenny Brooks (formerly with Bob Weir in RatDog). His name spread around GD circles, and he played with Weir himself in an SF Bay-Area benefit for the Jerry Garcia Foundation called “Imagine There’s No Hunger,” and after they hit it off, on several other shows. Working with the Foundation brought him into contact with Hot Tuna’s Jorma Kaukonen and Jack Casady, then another event connected him with Jason Crosby and Grahame Lesh of the Lesh Family Band...and the road goes on. Bruce Hornsby once remarked that Grateful Dead songs had become “hymns” – in fact, they really are the new canon of traditional American music. Their appeal, Waynard says, is two-fold; there’s the sheer eclectic gumbo of bluegrass, jazz, blues, R & B and you-name-it that is fused into what they did, what the songs represent—but “best of all is the improvisational nature of the music, the opportunity to explore the unknown, to have no earthly idea what will come next, which is the most inspiring part of it.” It's a musical adventure, and Waynard and RFoS are the ideal boat to take on the ride.

RFoS will include a rotating cast: 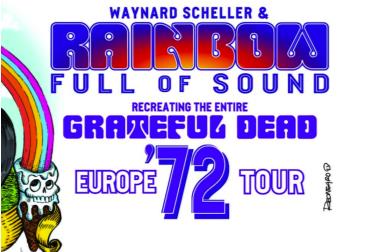