The 40 Acre Mule
https://www.facebook.com/40acremule/
"It used to be called boogie-woogie. It used to be called rhythm & blues. Now, they call it rock & roll "
Chuck Berry’s words are at the very heart of Roots Rock & Roll 5-piece, THE 40 ACRE MULE! The self-described “Rhythm & Blues Outfit” are a powerhouse of vintage revival with a reputation for seamlessly blurring the lines between country, soul and rock audiences with songwriting that borders between blues drenched heartbreak and an old school riot in the streets!
Influenced by the pillars of Rhythm & Blues like Chuck Berry, Little Richard, Bo Diddley and Ray Charles and inspired by recent artists such as J.D. McPherson, Nathaniel Rateliff and Gary Clark Jr., THE 40 ACRE MULE – J. Isaiah Evans: Guitar & Vocals, Robert Anderson: Drums, Tim Cooper: Bass, Chris Evetts: Baritone Sax & Percussion, and John Pedigo: Guitar & Vocals - quickly built their own unique sound by blending vintage Rock & Roll, Rhythm & Blues, Soul and just a touch of Country. It was a sound that soon caught on with The James Hunter Six, The Reverend Horton Heat, Eleven Hundred Springs, Ken Bethea of Old 97s, Alejandro Escovedo, Rosie Flores and more.
Since forming in Dallas, Texas in 2015, THE 40 ACRE MULE has built a loyal following the old-fashioned way, they earned it! Playing countless bars and packed clubs, they watched crowds grow mainly by word of mouth. As the crowds caught on, so did the likes of legendary promoter Scott Beggs and Jim Heath (The Reverend Horton Heat) who gave THE 40 ACRE MULE their first break with an opening slot at a SOLD-OUT show at Dallas’ legendary Bomb Factory. From there, opportunities to open for more superstars of roots music came along helping THE 40 ACRE MULE spread their brand of Rhythm & Blues music.
Playing to such diverse crowds has made their fanbase explode. "We’ve gone from 10 or 15 friends in a dive bar on a Tuesday to playing full-on festivals without even having an album out yet. That says something. I think we’re making music that people from all walks of life…country fans, soul fans, rockabilly fans…find comfortable and familiar. It’s because all those genres can trace their roots to Rhythm & Blues, the very backbone of Rock & Roll ", says J. Isaiah Evans
After years of putting in the work, THE 40 ACRE MULE followed in the footsteps of good friends and emerging Americana stars, The Vandoliers and Joshua Ray Walker, and signed with State Fair Records. After that, the good times kept rollin’ with a show stealing appearance at the 2019 HomeGrown Festival with Tripping Daisy, Toadies and The Suffers as well as tour stops with JD McPherson and Charley Crockett! Now, fresh off their nomination for Best Rhythm & Blues Act by Central Track, THE 40 ACRE MULE is set to make more noise with the release of their upcoming full-length debut, GOODNIGHT & GOOD LUCK with tour and festival stops coming your way!

Dead Flowers
https://www.facebook.com/deadflowersband/
"The Replacements are a big influence for Dead Flowers; it's obvious listening to His Blues and even more so on Let Me Be, which boasts a little more than a dozen tracks. The album's mix of blues, folk and punk rock, combined with Howe's whiskey-soaked rasp, also bears traces of Against Me! and the Rolling Stones. But Howe insists it is a coincidence that the new LP’s name is similar to Replacements classic Let It Be. -ERIC GRUBBS (DALLAS OBSERVER)"

"For sheer sweaty garage rock 'n' roll prowess in Dallas, it's tough to top Dead Flowers. Led by singer-songwriter Corey Howe, the band's third full-length album, Let Me Be, is a bold, brash follow up to the group's phenomenal 2014 His Blues. Hints from an array of punk gods ranging from Danzig to The Replacements can be detected, but Howe's raspy growls and the consistent, track-to-track greatness lend this LP its own identifiable grit.-KELLY DEARMORE (GUIDE LIVE)"

Within a year of releasing their first record Dead Flowers has shared the stage with acts such as, Murder City Devils, The Reverend Horton Heat, The Whigs, J. Roddy Walston and the Business, and Chuck Ragan. When they aren’t hosting touring bands, they're filling venues with local bands.

Quickly gaining respect as one of the most exciting up-and-coming bands out of Dallas, Texas, they are angsty, aggressive, loud, sincere and simply put- rock n' roll.

While they're certainly not trying to reinvent the wheel, Dead Flowers is comprised of members who's musical upbringings differ in drastic proportion; thus creating a sound that’s beginning to gain notoriety not limited to their city, state, or country.

Slobberbone
https://www.facebook.com/slobberbone/
Alternative country-rock unit Slobberbone comprised singer/guitarist Brent Best, lead guitarist Jess Barr, bassist Brian Lane, and drummer Tony Harper. Formed in Denton, TX, in early 1992, the group originally approached their music with the same seriousness with which they chose their name (a reference to a dog's chew toy, incidentally), gigging in the pursuit of free beer and little else; their first live show, in fact, was even held at an area liquor store. However, in 1995 Slobberbone self-released an LP titled Crow Pot Pie that caught the attention of Doolittle Records founder Jeff Cole, who quickly signed the band; in 1997 they issued their sophomore effort, Barrel Chested. Everything You Thought Was Right Was Wrong Today followed on the New West imprint three years later. After hooking up with producer Don Smith, the band recorded Slippage in the spring of 2002 for a summer release. The band played its final show in Denton in 2004, and Best, Barr, and Harper went on to form a group called the Drams.
-- Jason Ankeny, All Music Guide 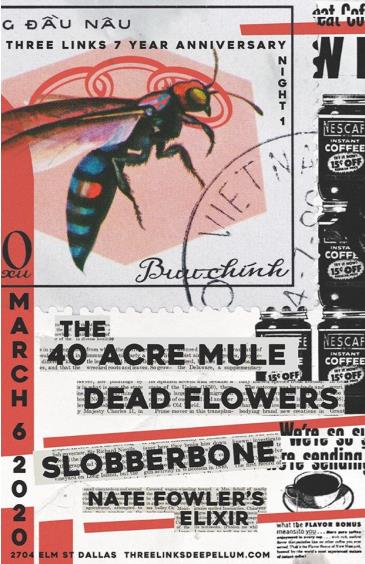