Tickets are not available. Check out more awesome performances at asylumnyc.com!

“That Just Happened” is a sketch comedy show for anyone that’s ever felt like an outsider in New York City.

Mary Corigliano and her cast will give you a chance to laugh at the daily WTF’s of living in NYC. Lucky for you, Mary was taught to handle these types of situations by one of the largest and strangest cities in the world. By the end of the show, you’ll see that the only way to get through a strange scenario is to just laugh and acknowledge the fact that "That Just Happened."

Mary has won awards and received other recognitions for her comedic sketches including National Lampoon, Atlanta Comedy Film Festival, JellyFest, and London Worldwide Comedy Short Film Festival. Her show “That Just Happened” was also a headliner at The Chicago Sketch Comedy Festival with sold out audiences.

In 2018 and 2019 “That Just Happened was given a monthly residency at The People’s Improv Theater’s main stage. When the show’s run was cut short in March 2020, Mary continued to make three full virtual sketch shows throughout the pandemic, with over thirty new individual sketches, and a cast of over forty actors from all over the country. 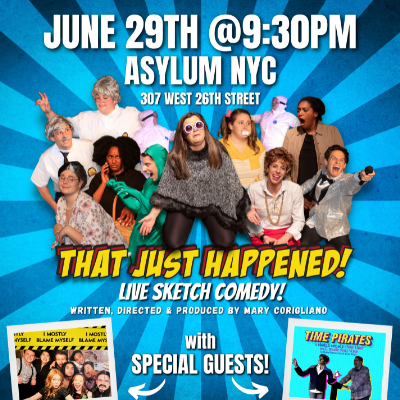