"Polish the crown because 2012's thrash kings have been crowned!"

Whether evoking images of a barren post-apocalyptic landscape or extolling the virtues of the nature’s ultimate might, thunderous prophecy shrouded in monolithic, overwhelming musical power has always been Testament’s domain. With Dark Roots Of Earth, (their 10th album, released on July 31st in North America through Nuclear Blast Records) the Bay Area quintet have delivered their most mature, complete and intense collection in 25 years together, nine mind-bending, pit- stirring classics that will instantly crush your skull while also serving a delicious amount of depth and nuance to devour. “It’s partially fantasy-based, partially based on the prophecies of the Mayan calendar, partially based on the whole

prophecy of the ‘end-of-the-world’” says guitarist/founder-member Eric Peterson, “but nature always ends up taking charge in the aftermath, we always end up back with nature being in charge.”

“Our world is changing,” furthers vocalist Chuck Billy, “it has changed over the last 10 years, the environment, the seasons, and it (makes you wonder) if there ‘might’ be something to those prophecies.”

“It’s hard not to see what the media’s feeding us,” adds Peterson, “ ‘The End of The World’ is like a big billboard, an advertisement, and I think a lot of people believe in it.”

It took a trip to the British countryside for Peterson to start connecting the dots between the initial creative embers explained above and the collection of riffs Testament had conceived for Dark Roots of Earth. Like heroes such as Black Sabbath and Led Zeppelin, who often wandered off to rural outposts for inspiration, much of the album’s heart and soul was conceived in darkest, rural Derbyshire with producer Andy Sneap at his Backstage Studios.

“Andy’s a guitarist himself (Sneap is in Sabbat), comes from our background and understands what we’re trying to do,” explains Eric, “so I asked him if I could go spend a week visiting to pull ideas together. Going there’s a whole other world. It used to be dairy farm, there’s lambs, cows, goats, ghosts, noises, (some) really spooky stuff in the old section where you can hear people walking up the stairs and doors slamming, it’s all pretty inspirational. You wake up after surviving the night, sit with your tea, toast and marmite, you look outside and it’s rainy but green everywhere, put on your guitar and

‘SCHOOP’…it’s killer, I love it. I went out there because I was hitting a brick wall with ideas, and I came back with nine songs in one week.”

During the subsequent working process for Dark Roots of Earth, Peterson and Skolnick found a symbiotic dovetail into the heart of Testament which saw them at times trading-off on their six-string rolls, Peterson sometimes whipping out a lead and Skolnick sometimes being the rhythm pig.

Thus, whilst Billy was spending time in LA with long-time writing collaborator Del James working on lyrics, Peterson and Skolnick were returning to their old method of writing, and Dark Roots of Earth confidently took it’s fully matured shape. “In the old days we used to go to Alex’s house in Berkeley and just hang around, smoke a bit, riff out together without any other instruments and just get the framework,” Peterson explains, “and I really wanted to get back to that way of doing things. So Alex flew out, we’d get together at our Driftwood Studios, go upstairs with our coffee and sandwiches, and sit up there all day just talking about music, hanging, playing some stuff, checking stuff out and organically discovering where we needed to go. We’d get to a lead part and I’d say, ‘I’d really like to do a lead!’ And Alex would say, “Sure, go for it, you should!” 20 years ago that just didn’t happen, but now it’s just a really great team.”

Peterson is just as effusive when he speaks of Billy’s vocal performance on Dark Roots of Earth.

“A lot of times in the past Chuck just wouldn’t sing certain things, but now he’s really doing some great vocal stuff that he’s never done before. I know he can sing whatever he wants because he’s got an incredible voice, but I think now he knows it too and is going to places stylistically that maybe in the past he just wasn’t comfortable with.”

Indeed, in all senses, the performances on Dark Roots Of Earth feel more liberated than ever. Bassist Greg Christian’s work feels warmer, looser and more locked into drummer Gene Hoglan than with any other rhythm partner. Hoglan, one of heavy metal’s most venerated drummers and veteran of acts such as Death, Forbidden, Dark Angel and Fear Factory, initially signed on to help simply record the drum tracks, only to find by the end of the recording process that it was time to rejoin the band having recorded 1997’s Demonic.

“He’s such a cool guy, just ready to play whatever you want him to play,” says Peterson. “He’s also an incredible pro; he can do anything from blast beats, jazz and his double-kicks are out of control, so we’re really happy that he decided to stick around.”

“His timing and cymbal work is insane!” laughs Billy, “and I know Eric was able to get everything he’s ever wanted from a drummer out of Gene…he is like ‘The Atomic Clock’!”

As well as the apocalyptic analysis taking place on Dark Roots... there are also other expressions of empathy for the various plights of humanity. Testament have always moved and acted like a tribe unto their own, so it’s no surprise that their lyrical gaze has absorbed subjects ranging from bewilderment at blistering hate to acknowledging that everyone is, in a sense, tribal.

“ “True American Hate” was inspired by a vision I had burned in my head of kids burning an American flag on the news,” says Billy, “there was so much hatred for it, and I didn’t understand. We try to help people, and then there’s this? It was so strange. And then with “Native Blood” I (purposely) didn’t wanna make it focused on just native Americans, I wanted it to be native ‘whatever indigenous people.’ That’s the vision I had, especially after a video I’d seen which showed all these different tribal leaders and people together stepping up and having something to say in these times.”

“We also decided to do that song in Spanish (“Sangre Indigena”),” adds Peterson, Testament deciding to throw down directly for one of the most passionate elements of their international audience, “we have some great fans in South America, Mexico too…”

“…I knew right away that “Native…: would be the Spanish song for sure,” furthers Billy, “and the translate title, “Indigenous People” , means MORE than just ‘native’, it’s for all tribes and all kinds. It was challenging, and now I guess I’m going to have to go and learn Spanish!”

“The whole thing about doing covers successfully is taking the song and making it your own so as people think ‘wow, that’s different, says Peterson, “and we certainly achieved that with “Dragon Attack” and “Animal Magnetism.”

“I wanted to find songs that were familiar but didn’t necessarily have heavy guitars or anything,” adds Billy, “so when the Queen song came up, I thought vocally I could hear re-doing that, and musically (we’d) make it Testament, get rid of the bass and take it over with guitar!”

“When I suggested “Animal Magnetism” I think it was like when Chuck suggested “Dragon Attack”  where I just could not picture it but he had a vision of how we were going to play it,” says Peterson” It was the same with “Animal…” I knew I was going to tune it down really low and make it like ‘Frankenstein’ or something…”

“…once I got into the mood and really just let it flow, it came naturally,” says Billy, “this dark, heavy thing which sucks you in and gets ya!”

“I remember (hearing) that Chuck wasn’t going to sing “make love to me”,” chuckles Peterson, “and he had to be talked into doing it or something like that!”

“I didn’t say it for any chorus, and on that last chorus I said ‘make’…but the power of pro-tools…” Billy laughs, “I didn’t really say it!!!”

Meanwhile, “Powerslave” is a raucous and shameless exercise in Maiden geek love!

“Yeah, we just selfishly put it on there because I’m a big fan of it!” grins Peterson, “Maiden’s version is (the one) and we pretty much kept it at that because it was really fun to play like that!”

Live, Testament continue to be one of metal’s greatest slabs of feral, sweaty and tribal entertainment, sets of thunderous intensity with Billy holding no quarter as he splits venue floor after venue floor in two before demanding that “you guys over here fuck up those guys over there!” and the musical congruence Testament have moved into now is resulting in some of their best live performances ever. Add to that undoubtably their best and most mature album yet with Dark Roots of Earth, and you have a band who are approaching their peak.

“We’re all in a good place right now,” says Billy, “there’s a lot more confidence in the writing and the performance.” “I think Testament is now finally the band that everyone thought we were in the past, says Peterson. “In the past we

weren’t maybe as confident, perhaps we thought we ‘should be doing certain things’, but now there’s nothing to worry about. We are who we are, we’ve stood the tests of time. And 25 years later, we’re playing heavier than we’ve ever played…”

Recorded in the Fall and Winter of 2011 through 2012 @ Driftwood studios, Oakland, CA & Backstage Studios, Derby, UK Recorded and Engineered by Andy Sneap 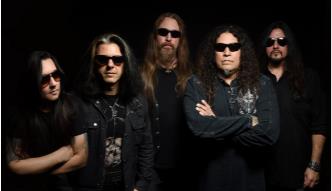