While Teeko’s notoriety over the last decade may come from his superhuman Turntablist repertoire -- DMC, ITF and Guitar Center champion, co-creator of the Vestax Controller One, recording for Grammy Award winning producer Mark Ronson, D’Angelo, Q-tip, Heavy D and others, his creative prowess naturally extends to his work as a keyboardist, writer and producer. He has also
received accolades by the world-renowned Berklee School of Music in Boston, receiving the Milestones Innovative Producer’s Award. Teeko has also been recognized by the prestigious Monterey Jazz Festival, being the 1st electronic music act invited to perform.
In recent years, he has teamed up with acclaimed fellow bay area producer B.Bravo to form the modern bass/funk outfit, Starship Connection. Hitting festivals across the country bringing new elements of live performance in the electronic music scene. His recent culmination of skills on synths, turntables and production have taken his live sets to new levels including several exciting collaborations with Salva, Mr Carmack, Dj A-trak, Ruckazoid, Fatima, Decap and more. After releasing his “Blast That” Ep on Dj Craze’s Slow Roast Records, he started 2016  strong by supporting Mr Carmack with powerful opening sets on his world tour. All in all, the man is at one with his art, no matter what his device his sound continues to take exciting new shapes while effortlessly blowing minds and breaking necks. 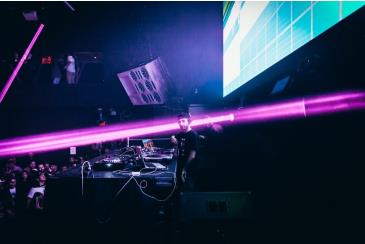