(Los Angeles, CA) Independent rap mogul Tech N9ne has announced the release of his next studio album, Special Effects, dropping worldwide on May 5, 2015. An all-star list of features and producers has yet to be disclosed, but the veteran rhymer says it will be his biggest album to date. "We're not giving it all away just yet, but what I can say to all my Technicians who have been patiently waiting for this, get ready for your minds to be blown! We made some dreams come true on this album. You WILL NOT be disappointed. It's a beautiful thing." The Special Effects cover art was created by world-renowned artist, Rob Prior, who has collaborated with Tech N9ne recently on a series of special edition paintings.

2015 will also see another massive year of touring for Tech N9ne. The Kansas City rapper will be heading out on Tech N9ne's Special Effects Tour 2015 this Spring. Tech will be joined by indie-rap mainstay Chris Webby, along with label mates Krizz Kaliko and MURS, Flint, Michigan's King 810and Jamaican rap-phenom, ZUSE. The tour will kick off April 8 and conclude on June 3. A complete tour itinerary will be announced in the coming weeks. Prior to the Special Effects Tour 2015, Tech will be heading back down-under for a tour throughout Australia and New Zealand in March.

The Special Effects album and tour arrive after a banner 2014 for Tech N9ne. In May, he released hisStrangeulation Collabos album, which debuted as the #1 independent, #1 rap and #5 overall album in the country on The Billboard Top 200.

As Strangeulation and "Fragile" ruled the charts and radio, respectively, Tech N9ne was traversing the United States and Canada in 2014, headlining three tours. The Independent Grind Tour featured Freddie Gibbs, Jarren Benton and Psych Ward Druggies, while his Tech N9ne's Band Of Psychos Tourpaired Tech N9ne with a live band for the first time in his career. Tech N9ne also went north of the border for the 2014 Strangeulation Canadian Tour and performed at several festivals including The Aftershock Music Festival and Slipknot's annual Knotfest Festival. 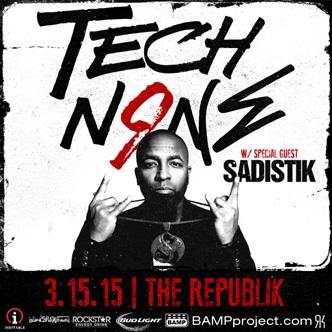