In case you don’t know us,here are some words from a long-time friend and journalist,Jonah Bayer, about our new album, Tidal Wave…

It's difficult to believe that Tidal Wave is Taking Back Sunday's seventh album.  While most of their peers have either broken up, faded away or reunited to capitalize on the emo scene's wildfire revival, Taking Back Sunday have always been the Pearl Jam of the scene in the sense that they've consistently plugged along and continued to reinvent themselves regardless of what was trendy at the time. “By the time most bands get to this point in their career they are pretty set in what they do but we were really mindful about approaching our musical ideas differently this time around and staying true to where the five of us are in our lives right now,” front man Adam Lazzara explains. “This album is truly an expression of what Taking Back Sunday is during this snapshot in time as opposed to what we think people expect from our band.”

This ethic is nothing new for Taking Back Sunday who started out playing basements at VFW halls in 1999 in Long Island alongside acts like Thursday and Midtown before transitioning into mainstream icons via hit singles such as “Make Damn Sure” and “Set Phasers To Stun.”After losing a few members following the release of their breakthrough debut album Tell All Your Friends, the group reunited with their original lineup of Lazzara, guitarists John Nolan and Eddie Reyes, bassist Shaun Cooper and drummer Mark O'Connell six years ago shortly before the creation of 2011's self-titled album. Correspondingly Tidal Wave is not only the follow-up to 2014's Happiness Is but also marks the first time the group have ever made three consecutive albums with the same lineup. For Tidal Wave, the band also brought back producer Mike Sapone and mixer Claudius Mittendorfer, who both worked on Happiness Is. “I think with this album we all really learned to trust each other with our ideas and that's something that took a while to cultivate when we first got back together,”Nolan admits. “There is no way these songs would have come out the way it did if we didn't believe that each member's ideas were worth bringing to the table.”

Tidal Wave also marks the first time that Taking Back Sunday wrote in the studio as they recorded and having that type of fluidity when it came to the songwriting also lent itself to heightened collaboration and creativity throughout the process.“It was really amazing to be able to write in the studio because we could come up with an idea, perform it and then listen back to it immediately instead of feeling boxed in by what we did on demos,” Lazzara explains. “Every song was up for being changed or rewritten when we were in the studio, which was an approach that Adam really encouraged, and nothing was ever set in stone in the sense that if someone had any idea for how to make a song better we would give it a shot,” Nolan adds. “That approach has potential to be really disastrous but we were fortunate enough to see everything through and use our collective judgment to take things to the next level.” Nolan specifically cites 'Homecoming' as a song the band constantly kept returning to in order to finally achieve the version that's present on Tidal Wave.

In many ways the album showcases the strengths of Taking Back Sunday's musical evolution from the blazing opener “Death Wolf” to the orchestrally tinged ballad “Fences”and syncopated anthem “Call Come Running.”  However as stated earlier there are also plenty ofsurprises on Tidal Wave such as the four-on-the-floor title track which sees them channeling the Clash both sonically and energetically. “I think this idea of making songs that we wrote for ourselves started with Happiness Is and since the reaction to that album was so positive it really encouraged us to take that a step further with this album,” Nolan explains. Furthermore songs like “You Can't Look Back” see Lazzara taking his vocals to stratospheric new levels in order to elevate these songs to a whole other plane of existence. “In the same spirit of being fearless when it came to the music, I tried to lean on the influence of some of my favorite singers on this album,” Lazzara explains. Case in point, during “Holy Water” it seems as if he is digging so deep that the song is the sonic equivalent of a bittersweet punch to the gut.

Admittedly the process of making Tidal Wave wasn't easy but ultimately the best art doesn't come out of stagnancy and the band couldn't be happier with the final product. “We pushed ourselves so hard that when I listen back to this album now I don't second-guess any of it,” Lazzara explains. “I just sit back and think about how glad I am that we put ourselves through that because without that persistence this record never would have evolved to what it eventually became.”  Sure, it may seem ironic that Taking Back Sunday have transcended the emo tag right when the genre is undergoing a resurgence – but if you really think about it, those types of decisions are exactly what have kept the band relevant. “I do so many interviews now where I get asked about the emo revival and I'm like, 'what are you talking about? We never slowed down and we never quit,” he summarizes. “I think this record is going to help us reconnect with our old fans as well as cross paths with some new ones but in the end we wrote it for ourselves and we couldn't be happier with it.”

In other words when Lazzara sings, “It's taken me all this time to see... I'm coming home” on the acoustic showstopper “Homecoming” it's not just about geography, it also paralle ls the next exciting chapter in Taking Back Sunday's career. Welcome back, guys. 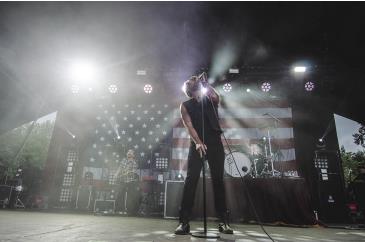