MS54 - Myon & Shane 54 were voted 62 in the 2010 DJ Mag Top 100 after two years of amazing achievements. This massive success is down to their mix of incredible talent and work rate. Their iconic chart topping productions and remixes, and performing their own defining brand of music and fantastic mashups on the DJ circuit have created a new exciting buzz in the genre.

The quality of their work was quickly spotted by 1 DJ Armin van Buuren, whose fans voted them straight into the live ASOT 400 live broadcast; featured on the last 2 ASOT compilation, and remixing his own productions. This has been echoed by other top producers including Andy Moor and Above & Beyond, who quickly signed them up to feature on their compilation albums.

They have produced an enviable list of productions including 'Vampire', 'Helpless', 'Not A Lot Left' and remixes 'Never Say Never' by Armin van Buuren, 'Under Your Spell' by Cosmic Gate and 'Love Comes Again' by Tiesto. On top of this they have a new 'Anjunaband' called 'Velvetine', a partnership with legendary trance singer Aruna on Ajunabeats.

EDM fans are demanding them at gigs across the globe leaving little time to unpack the suitcase between events. Myon & Shane 54 are set to become something they've always dreamt about: a driving force in dance music.

MFSS - You’re not dreaming. This is real. The club you’re in feels as though the entire building is the VIP area, not just because of the lingerie models wearing black nerd-glasses piling over you to reach another bottle of bubbly, or the gyrating wall-to-wall moshpit that’s the dancefloor. Tonight feels special because the DJs – the engine of the party – are rockin’ it like you’ve never imagined. Oh, and they’re wearing matching NASA spacesuits and there’s a six-foot-tall teddy bear onstage hyping the crowd like a maniacal MC. The DJs are MANUFACTURED SUPERSTARS, and tonight is every night.

MANUFACTURED SUPERSTARS are BRADLEY ROULIER and SHAWN SABO. As DJs, their performance style is as high-energy, accessible and fun as it is technically challenging. Although their DJ performances have been described as “mash-up” or “open-format” by many in the music press, what they really do is create a non-stop tornado of happiness when they spin. This can be evidenced by the countless smiling faces in their crowds and the consistently sold-out shows. 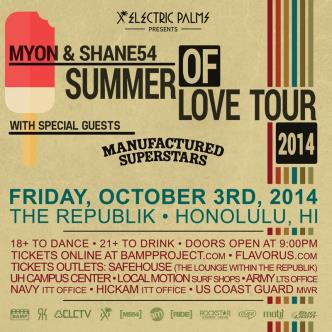