Six years. It’s longer than the president sits in office or most people spend in college. In the music industry, it’s practically an eternity. Bands form, blow up and break up in that time period; new, disturbingly awful trends develop, old forms of media die out, social networks spread their insidious seed through shiny handheld devices no one actually needs but everybody wants.
Six years is also the amount of time that has passed since Strung Out’s last album. The Southern California tech-punk quintet had been so reliable for two decades—write, record, tour, repeat cycle roughly once every two years—that to go this long without new music felt like cause for alarm. Frontman Jason Cruz shared similar feelings.
“You get to a point where you decide if you’re going to go on or stop,” he admits. “Everyone kind of just lived life for a little bit. I think that’s pretty important if you consider yourself a songwriter or an artist of any kind. You have to live and experience other things in your life to have something to write about, to give value to what you’re singing about.”
Cruz & Co. were able to put their time off to good use, focusing their energy on the creation of Transmission.Alpha.Delta, out March 24 on their longtime label Fat Wreck Chords. The album didn’t come together easily, though; according to Cruz, writing was a yearlong process, as was recording. “We have an excess of ideas, and everyone in the band likes to put their elbows up and fight for their ideas,” he explains. I think that conflict is healthy. It’s all part of collaborating.” The process was further knotted by adding in another strong voice in producer Kyle Black, whose previous production credits ranged from Paramore to Comeback Kid. “There was butting heads in the beginning,” Cruz admits. “We’ve been doing something for 25 years and then some kid steps up and tells you to try it a little differently, all of us were like, ‘What? Who is this guy?’”
Early tensions were resolved, though, when the band realized they had an ally behind the boards. “Kyle was the first producer we’ve worked with that was a true fan of the band,” the vocalist says. “A lot of people said Transmission.Alpha.Delta is reminiscent of some of the earlier stuff we did, and I think Kyle had a lot to do with that, celebrating what this band is but at the same time hopefully elevating our artform.”
And elevate it he did; Transmission.Alpha.Delta is an album well worth its half-decade wait, with incredible songs like “Magnolia,” “Modern Drugs” and “Tesla” lyrically tackling difficult issues like drug addiction, faith and even the technological brainwashing of today’s youth while musically measuring up with the best moments of the band’s back catalog. “The biggest theme of this record was that we were all outside our comfort zone,” Cruz says. “Instead of just soloing, we’ve incorporated the solos into the actual structure of the songs. We mixed up the tempos, and we switched to E flat, which gives the guitars a better tone. I think we created a journey from where each song begins to where the song ends are two completely different places. I love that about Strung Out songs.”
Cruz is is own harshest critic, so when the singer says this might be his favorite Strung Out album, he really means it. “I judge the record by how accurately it describes my life,” he says. “As long as it’s a representation of who I am, and sincere and not pandering to any ’90s bullshit—I fuckin’ hated the ’90s. I don’t want Strung Out to be a nostalgia punk band at all. I wanna be right here, right now. I consider it an honor to be a musician and to contribute to everything that came before me.”
That urge to keep pushing to be modern and relevant and not rest on their laurels is what continually sets Strung Out apart from so many of their nostalgia-obsessed peers. “I’m not interested in looking back at all,” Cruz states. “I have no time or energy for that. There’s too much shit to be done. When I’m sitting in a diaper and on a morphine drip, maybe I’ll look back. Maybe I’ll actually listen to one of our old records.”
It’s clear Strung Out are rejuvenated and ready for more. And even though Cruz might not listen to Transmission.Alpha.Delta again until a few decades from now, odds are their fans will listen to it more than enough in the interim.
Strung Out’s Transmission.Alpha.Delta out March 24th on Fat Wreck Chords! 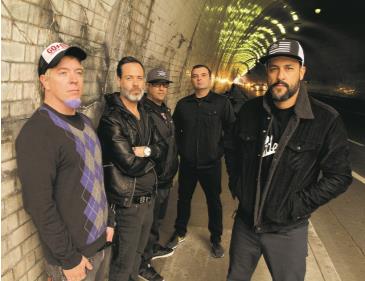