Party where the Rock Stars do, Presented by Y96.9 at Sunshine Studios Live

Struggle Jennings was destined to be an Outlaw.. The grandson of legendary Country Music icon Waylon Jennings, Struggle is part of a long legacy of Gangsters, Outlaws and Rock Stars.. Growing up as a black-sheep in his family, he fought his way out of the streets of West Nashville and into the studio where he would create the foundation for what has become his personal contribution to the Jennings family legacy..
Struggle's message of strength, determination and courage in the face of adversity continues to connect and resonate with people around the world. By sharing his story with honesty and passion he has developed a large and loyal fanbase who relate not only to his music but also to his personal journey.
Since being released from prison in 2016 Struggle has performed for sold out crowds across the country and released multiple projects. He is finally poised to take his place as a true modern day Outlaw and secure his position as the Godfather of the burgeoning Outlaw Hip Hop Rock & Roll movement
www.youtube.com/iamstruggle
www.instagram.com/iamstruggle
www.twitter.com/youngstrugg 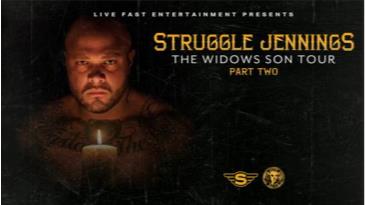