Comedian  Steve  Treviño is “America’s Favorite Husband.”  He  has  quietly  become  one  of  the country’s fastest-rising comics, viewed over 175 million times as of 2020, selling out shows coast-to-coast,  amassing  nearly  1  million  total  social  media  followers,  and  headlining  specials  for Amazon, NETFLIX, Showtime, and more.

He opened the 2001 Three Amigos Comedy Tour featuring Carlos Mencia, Pablo Francisco, and Freddy Soto. By 2006, he began headlining. He delivered side-splitting performances on The Late Late Show, Comics Unleashed, and BET Comic View, in addition to writing for Mind of Mencia and producing and writing for international GRAMMY® Award-winning superstar Pitbull’s La Esquina. His first Showtime special, Grandpa Joe’s Son, staked out a spot in the Nielsen Top 20. In 2014, he funded, produced, and shot his runaway NETFLIX hit Relatable. To promote the special, he uploaded a clip entitled “When Your Wife Comes Home From Shopping,” which generated 56 million views on Facebook alone and paved the way for clips like “When You Ask Your Wife If She Wants McDonald’s” [21 million views] and “When Going to Vegas With Your Wife Goes Wrong” [4 million views]. 2018’s ‘Til Death special maintained his momentum and can currently be viewed on Amazon Prime.

The son of a Vietnam Vet, Steve is passionate about raising money for Helicopters for Heroes, an organization benefiting veterans.

In 2020, he and his wife, Renae, unveiled a joint weekly podcast entitled Steve Treviño and Captain Evil, and he filmed his fourth self-produced comedy special, My Life in Quarantine, which was picked up by Amazon Prime. The once-in-a-lifetime pandemic special was shot in front of a masked, socially distant crowd and focused on the ups and downs of getting through quarantine. In 2021, Steve produced his fifth special at one of his shows in Waco, Texas, entitled I Speak Wife, which will be released this year. 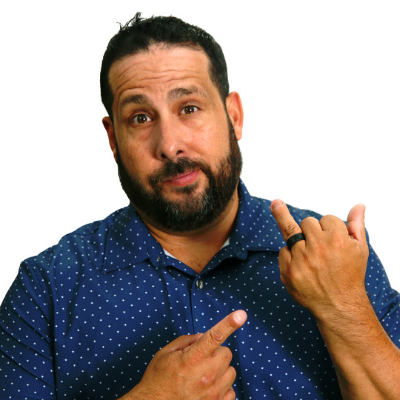