Processing...
Tickets
Tickets are available at the door

Vancouver raised, Los Angeles based singer-songwriter Emilee Moore is turning her heartbreak into confessional and wistful pop, weaving misery and memories with airy vocals, earnest lyrics and evolving soundscapes to capture all the ups and downs of love. Influenced by music from John Mayer to Avril Lavigne, and Coldplay to Bon Iver, Emilee Moore’s take on pop music slips seamlessly from guitar ballads to lush vocal arrangements, with relatable and heartfelt lyrics reminding listeners of their shared experiences in love and love lost. With eight single releases this year, Emilee has found herself on several popular playlists including Spotify’s New Music Friday Canada, Fresh Finds, and Indie Pop & Chill as well as Apple Music’s New Music Daily, Wildflower, and New In Pop. As she continues to release music, Emilee invites listeners into her world while she pieces together her journey of young love, heartache, regret and healing, putting into song all the words you wish you’d said.
Instagram: https://www.instagram.com/emilee.moore/
Twitter: https://twitter.com/emileemoore_
Facebook: https://www.facebook.com/Emilee-Moore-100218862032153
Spotify: https://open.spotify.com/artist/21k39bIiVAame9O5MWRS4m?si=-8W3BaxjSKOXpIeELv-1bQ

Stefan Benz, the teen Sensation is currently the youngest artist to ever have a #1 hit in South Africa! Stefan harbors a rare vocal talent that has been praised by industry heavyweights, including Charlie Puth, Shawn Mendes, Jennifer Lopez and DJ Khaled.

Having already written & released 18 songs at the young age of15, Stefan has seen support from US weekly, Tiger Beat, Celeb Secrets, Just Jared, Sweety High and many more. He has also performed on notable television programs and radio stations like, “Good Day NY” and “Radio Disney”, opened the US OPEN ceremonies at Arthur Ashe stadium and made history as the youngest artist in the History of Spotify to make the NMF playlist when he was 12.

Charli is an award-winning indie-pop artist. After leaving France for Los Angeles in 2020, she released 8 singles and 1 EP. With the bouncy sounds and personal lyrics, Charli shows her opinion in her music. Music helps her to express herself on many levels: it's a puzzle between her emotions, music and words.  Her warm and suave voice is influenced by Tessa Violet, Tory Kelly and Dua Lipa.  In 2021, she started a new chapter in her career: she wrote a short-movie, "The Time left" based on her music and won multiple awards included Best Musical Film and Best Actress at Silk Road Film Awards Cannes, and Best Original Song at Indie Short Fest in Los Angeles. 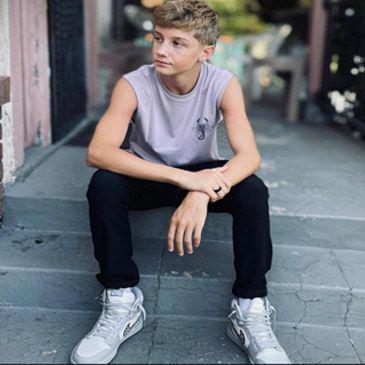