Join us as we bring you a Special night where we bring Everything Steampunk:

Over 50 Artists and Local Vendors from All Over California under one Roof, for One Night only in Los Angeles.

WHAT IS STEAMPUNK? Steampunk is a sub-genre of science fiction that typically features steam-powered machinery,[1] especially in a setting inspired by industrialized Western civilization during the 19th century. Therefore, steampunk works are often set in an alternate history of the 19th century's British Victorian era or American "Wild West", in a post-apocalyptic future during which steam power has regained mainstream use, or in a fantasy world that similarly employs steam power. Steampunk perhaps most recognizably features anachronistic technologies or retro-futuristic inventions as people in the 19th century might have envisioned them, and is likewise rooted in the era's perspective on fashion, culture, architectural style, and art. Such technology may include fictional machines like those found in the works of H. G. Wells and Jules Verne, or the modern authors Philip Pullman, Scott Westerfeld, and China Miéville. Other examples of steampunk contain alternate history-style presentations of such technology as lighter-than-air airships, analog computers, or such digital mechanical computers as Charles Babbage and Ada Lovelace's Analytical Engine.

WANT TO SHOW YOUR STEAMPUNK THEMED/INSPIRED ARTWORK AT THIS EVENT???
If you are an Artists and would like to Participate please E-mail: deadsketch@gmail.com with samples of your work, or with the work you wish to submit into the show. Wite "Steampunk LA Artist" on the subject line. We will contact you with Approval and More information/Instructions.

ARE YOU A VENDOR WITH STEAMPUNK RELATED ITEMS AND WOULD LIKE TO VEND AT THIS EVENT???
Please send a link of your work to yoursteampunk@gmail.com, and we will get back to you with the proper paperwork. Write "Steampunk LA Vendor" on the Subject line. We will contact you with Approval and More information/Instructions 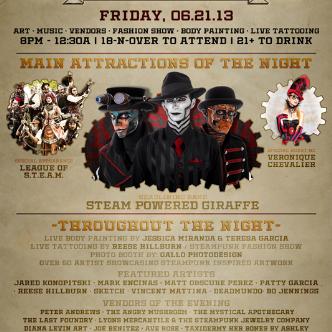