On October 21st, AVALON Hollywood proudly welcomes back Standerwick to the stage with special guest Shane 54. Hailing from the UK, headliner Standerwick is known for his gifted Trance music production, creating songs that are often featured on Beatport’s Trance Music Top Ten Tracks.

His skillful production has resulted in a loyal fan base with appearances throughout the world. His pulsating tracks keep the audience dancing well into the morning, and makes him one of the most in demand DJs in the Trance scene.

Starting as a publishing prodigy at the highly respected Zomba Music Publishing Group, he quickly became a standout talent. His popularity soon led to a prominent DJ career and he began headlining major music festivals around the globe. In 2014, DJ Mag featured Standerwick in their ‘New Wave of Trance’ feature only several months after he began DJing.

Supported by artists like the legendary Gareth Emery, Standerwick has had songs released on prominent labels like Monstercat and Armada. Still topping the charts, his most recent track “Into The Deep”, was featured on ‘Who’s Afraid of 138!’ Top 15 tracks of September.

Shane 54 graced AVALON’s stage earlier this year and rocked the house with the launch of his new project’s tunes - this set is to be no different.

Standerwick’s live show will be unforgettable, and you won’t want to miss this renowned DJ at AVALON Hollywood on 10/21. 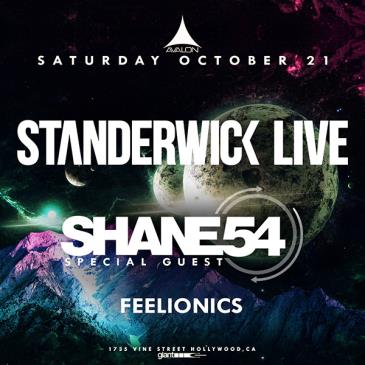