The Songbirds Rising concert series is the party for you, whether you're an octogenarian, a hardcore emo, a rollerblader, a wolf, a wizard, a Chattanoogan, an out-of-towner, a twenty-one-year old scenester, or an "ok" boomer. As long as you're friendly, you like to discover new music, and you're willing to put your phone down and rock out to the greatest bands you should know, this show is right for you! This edition of Songbirds: Rising has a lineup of two great bands, presenting music that we love, that will add some Sweet'n Low to your Friday evening. All you have to do is show up, relax, and make the magic happen. This is a standing show.

Bendigo Fletcher:
The full-length debut from Bendigo Fletcher, Fits of Laughter is a collection of moments both enchanted and mundane, sorrowful and ecstatic: basking in the beauty of a glorious lightning storm, waking with a strand of your beloved’s hair happily caught in your mouth, drinking malt liquor while bingeing “The X-Files” on a lonesome Saturday night. As lead songwriter for the Louisville, KY-based band, frontman Ryan Anderson crafts the patchwork poetry of his lyrics by serenely observing the world around him, often while working his grocery-store day job or walking aimlessly in nature (a practice partly borrowed from the late poet Mary Oliver). When matched with Bendigo Fletcher’s gorgeously jangly collision of country and folk-rock and dreamy psychedelia, the result is a batch of story-songs graced with so much raw humanity, wildly offbeat humor, and a transcendent sense of wonder. 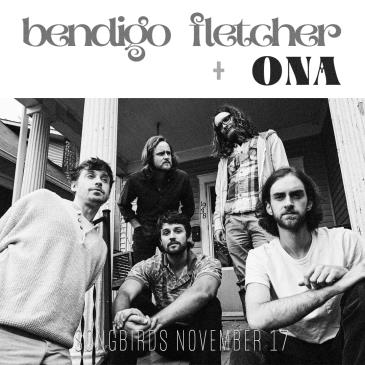