2020 was not quite what Jay Farrar was expecting for the 25th anniversary of Son Volt. Instead of a triumphant tour marking the illustrious landmark, Farrar was forced indoors by the pandemic, and his “Reverie” during that time helped define Electro Melodier, Son Volt’s 10th studio album – and third for influential Nashville indie Thirty Tigers. The title, taken from the names of two vintage amplifiers from the late ‘40s and early ‘50s, also describes the disc’s unique blend of folk, country, blues, soul and rock – an electric troubadour with melodies that hit and stick.

Once again accompanied by the current Son Volt line up – keyboardist/steel guitarist Mark Spencer, bassist Andrew Duplantis, guitarist Chris Frame and drummer Mark Patterson – Farrar takes a slight turn from 2019’s politically pointed Union to a series of songs that asks questions rather than demanding answers – think of “Living in the U.S.A.” as Farrar’s version of Bruce Springsteen’s “Born in the U.S.A. . . .”

Son Volt is ready to return to what they know best after a welcome period of introspection. “It’s a good time to take stock of what’s lost and what’s gained,” said Farrar. “At this point, we’re not even sure what we’re going to get back.”

Kentucky singer-songwriter S.G. Goodman blends the sounds of traditional country and folk with moody electric grit and progressive ideas. She is brutally honest when shedding the layers addressing the social and economic complexities of living in the rural south, but does it with the grace of someone who respects the land and the people whose stories she’s absorbed along the way. —Vasilia Scouras, Mountain Stage 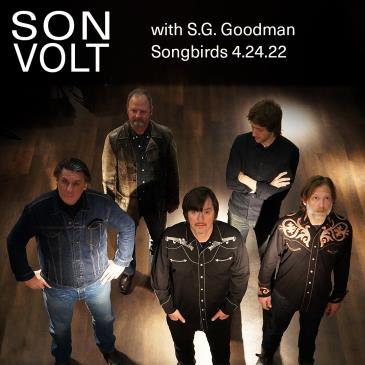