When asked to describe the various elements that came together to form their first full-length record, Sophie Hawley-Weld and Tucker Halpern—the duo better known as SOFI TUKKER—both let out a simultaneous laugh. “Lots of craziness,” says Sophie, “It’s the sound of traveling and excitement and new friends and endless shows and total exhaustion and learning more about ourselves through it all. It sounds like our lives.”

It makes sense that Treehouse, SOFI TUKKER’s sparkly new album, would encapsulate the sound of so much wildness. Since releasing their debut EP, Soft Animals, back in the summer of 2016, the New York duo have ridden a wave of attention that neither could have ever anticipated. The band was catapulted into the spotlight by the success of their first ever single, the genre- smashing “Drinkee,” which, after being featured in an ad for the Apple Watch, quickly went on to rack up over 45 million Spotify streams and snag a Grammy nomination—no small feat for a song adapted from a piece of Brazilian poetry and sung entirely in Portuguese, one of the languages that Sophie speaks and has a particular passion for. Before they could fully make sense of what was happening, the two found themselves playing in front of increasingly larger audiences, wowing clubs and festival stages all over the world. “The whole thing became a big exercise in learning to just go with it,” says Tucker, “The same thing was true about making new music.”

Recorded in various places around the world, the ten tracks on Treehouse reflect the wily, nomadic nature of its two makers. “We just worked whenever we had time, wherever we happened to be, “says Tucker. “We wanted to keep our forward momentum going, which meant recording and writing at odd hours between shows and on days off, no matter how exhausted we were.” The result is an album that takes the eclectic poetry-pop sensibilities of the band’s debut EP and blows them up to stadium-size. “An important aspect of the record is that we made it while we were on the road and playing shows,” says Sophie. “We tried the songs out with audiences, which really inspired us. If something didn’t connect the way we thought it might, we’d go back and re-work it the next time we were in a studio.”

The mania of touring and live-wire enthusiasm of the band’s live show are evident in tracks like “Fuck They”—the record’s emphatic first single—as well as songs like the Portuguese-laden “Energia,” the slick electro of “Baby I’m a Queen,” or the pulsing “Batshit,” a searing, bass- heavy pop banger that the duo finessed in their live set before recording. “For that song, Tucker gets to take the mic and I play the guitar,” explains Sophie. “When we have a huge audience of people screaming ‘I’m batshit crazy!’ back at us, it’s hard to explain how much fun that is. It’s really fucking fun.”

The give and take with audiences—and the feeling of creating a kind of ecstatic communal space—is at the heart of Treehouse, a record that seamlessly marries the vibe of classic house music with deft guitars and exotic percussion. “A Treehouse is this magical place where you can allow yourself to return to this childlike state of awe and creation. Anything goes in a Treehouse. We loved that idea because that is what we’re always trying to create—a safe space where everyone can experiment and be themselves. It’s this elevated space in nature that can bring you back to those childhood impulses and freedoms.” In a display of experimentation on stage, SOFI TUKKER play an eight foot tall MIDI drum sculpture of their creation called “The Book Tree.” Sophie and Tucker also bring this creative, community spirit to their sweaty, intimate DJ sets. “Whether playing live or DJing, we’re trying to bring that Treehouse mentality with us everywhere we can. It’s important to us to create a space where everyone in the room is expressing themselves with abandon, not just us on the stage.”

At a time when the world feels particularly chaotic, pop music not only provides a temporary escape, but also serves to connect us—even if it’s just briefly—to our core values of friendship, community, and togetherness. As Sophie and Tucker explain it, the music isn’t meant just to distract us, but to activate something. “So much of this record is about friendship,” says Tucker. “We made some really amazing friends in these different places around the world. You get thrown into these crazy situations and you become fast friends, but in the best sort of way, that way in which you immediately fall in love with each other and then you miss them when you leave. The energy of new friendships is one of the best feelings ever and that was something we wanted to harness on the record: this feeling of endless possibility."

Those fast friendships manifest on the record both in terms of subject matter and collaborations. “Good Time Girl” is a collaboration with the band’s friend Charlie Barker, who also contributes artwork for the band, and on “Best Friend” there are appearances by the likes of Nervo and The Knocks. “It’s a bit like summer camp,” explains Sophie. “You meet people and in a few days you feel bonded for life. We go a couple months without seeing these people, and then you cross paths again and there is all of this excitement and inspiration, like ‘What have you been up to? How can we collaborate? Jump on stage with us! Let’s play on a song together!’ We just want to celebrate that feeling!” In the case of “Best Friend,” that spirit of friendship was infectious, as the song went on to become a Top 20 US hit at Pop and Alternative radio and earned all bands involved their first appearance on the Billboard Hot 100 and US network television debut.

“One of the things that always fascinated me about dance music—house music, in particular— was that it came from this place of freedom,” says Tucker. “It came from these rooms where people went to feel liberated. When we felt this connection playing music for people, whether it was a hundred people in a tiny room or 20,000 people at a festival, we realized that connection is the ultimate goal. I don’t know if we really knew that when we first started touring, but once we did, that changed how we thought about making music. That became the biggest inspiration on our music moving forward. I hope this album shows that.” 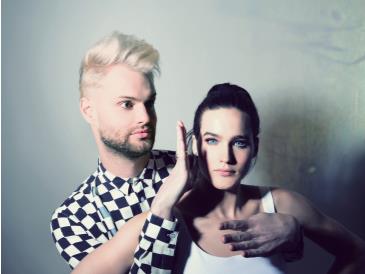