T.S. Eliot once famously claimed, “Only those who will risk going too far canpossibly find out how far one can go.”

At its heart, the record reflects not only creative progression,but personal as well…

“The story of Gossip really begins in me transitioning from a boy to a man,”admits Kellin. “I grew up basically my entire life playing music in this group.This record is me figuring out who I’m supposed to be as a musician, a husband,and a father. It’s a hard, scary, rewarding, and daring process that getschronicled in the lyrics. Musically, I feel like it’s the first Sirens recordthat sounds specifically like us. We took chances, experimented, and continuedto do what we do best: create art. It’s something new. It has an authenticsound that we’ve been working towards all this time.”

When it comes toalternative music, the boys have quietly pushed the envelope since the releaseof their 2010 debut, With Ears to See andEyes to Hear. Along the way, Sleeping With Sirens’ delicate one-two punchof towering melodies and tight musicality galvanized a diehard fan base dubbed “Strays” as they sold a staggering totalof 1.5 million albums worldwide. 2013’s Feelbowed at #3 on the Billboard Top 200and boasted a standout collaboration with MGK entitled “Alone.” Its 2015follow-up Madness went Top 15 andearned unanimous acclaim with The NewYork Times praising how it, “blendstender and anguished in equal measure.”Along the way, Alternative Press namedthem 2014 “Artist of the Year” at the Alternative Press Music Awards, awarded“Kick Me” the 2015 “Song of the Year”, and touted them on its cover six times. They’vegraced the main stages of Warped Tour,Reading & Leeds, and more inaddition to Kellin duetting with Pierce The Veil on the gold-certified “KingFor A Day.” After a whirlwind 2016, the guys hunkered down in January 2017 andcommenced work on what would become Gossipfor the next six months.

The sessions earmarked a few firstsfor Sleeping With Sirens. It’s the first time that they recorded in multiplestates, working everywhere from Los Angeles and Nashville to New Jersey. It’salso the first time they collaborated with producer David Bendeth [Paramore,All Time Low]. Often tackling one vocal or guitar part for eight hoursstraight, the musicians meticulously tapped into what Kellin dubs an “Electric” energy.

“We finally captured the liveexperience with Bendeth,” says the frontman. “We have the production, butthere’s a rawness that comes through. David is very old school. He reallypushed us, and we pushed ourselves. We realized what we could do as artists,and we evolved.”

That growth shines through the firstsingle “Legends.” Piano and drums resound as Kellin empoweringly chants, “We could be legends after all.” It’s atriumphant call-to-arms bolstered by swells of hulking hooks and guitar.

“It’s about looking at your life andall of the obstacles in front of you and maintaining faith, belief, and love inyourself no matter what,” he goes on. “If you want to be somebody great, youmust have that confidence. We’re in an age where everyone is surrounded bysocial media and constantly being judged.  So strength comes from within. It’s a reminderthat the work and time will pay off in the end.”

Over propulsive clapping on the titletrack “Gossip,” Kellin presciently croons, “Igot that new sound and when I come ‘round I’ll be your nightmare, I’m comingfor you don’t be scared.” It sums up the album’s mission statement, proudlyaddressing the evolution over snapping six-string distortion and the scorchingfalsetto that turned the conversation towards Sleeping With Sirens in the firstplace.

“The song discusses what people sayabout you,” he explains. “It correlates to social media again and how humansgenerally act. Everybody always has an opinion, whether it’s good or bad. It’ssuch a different record for us. We took the leap. We stand behind it.”

Acoustic guitar slips into anavalanche of glitchy electronics and vocal torrent on “One Man Army,” while“Trouble” hinges on a danceable groove and swaggering admission, “I’m in trouble.”

“‘Trouble’ is all about being blindedby what we think is important,” continues Kellin. “We get in trouble because welose sight of what really matters. It’s about coming to terms with what mattersin life. For me, it’s the little things like the moments I get to sleep in myown bed, wake up, and see my daughter or when fans tell me I got them throughhard times.”

Gossip signals thestart of another chapter for the band as well. In 2017, they inked their firstmajor label deal with Warner Bros. Records as Kellin puts it, “They operatelike an indie and automatically felt like family. It was like the starsaligned.”

“No matter what anyone says, I  want to encourage listeners to take risks oftheir own,” Kellin leaves off. “Our band took a chance. We’re going to back it.That’s all you can do as an artist. This is my diary. It’s who I am.” 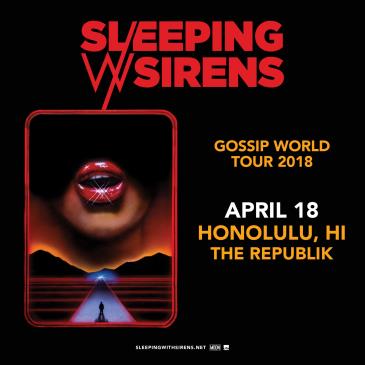