theJTCollective, Rhyme Fanatic at The Airliner

TICKETS ARE AVAILABLE AT THE DOOR.


Join us for an incredible performance by Skyzoo and special appearances by Foci & DJ Pops, Versis, Christine Ariya, Frey Rose, and Holly Valensat The Airliner in Los Angeles, Friday January 26 2013.

A little bit about Duck Down recording artist Skyzoo...

He rose to prominence in 2006, with a collaborative EP entitled Cloud 9: The 3 Day High, with Grammy award winning producer 9th Wonder. The project reportedly took a total of three days to complete from start to finish. The EP became an underground favorite and garnered Skyzoo media write ups in outlets such as XXL, The Source, Vibe, AllHipHop.com, HipHopDX.com, HipHopGame.com and more.

In 2009, Skyzoo signed to independent staple Duck Down Records, and his debut album The Salvation was released in 2009 with the singles, "The Beautiful Decay", "Popularity", "Easy To Fly", and "My Interpretation" The album debuted at number 14 on the Billboard Hip Hop charts, and was critically acclaimed upon its release. To date it's heralded amongst the Hip Hop community as a classic debut album, and has been labeled one of the few great debut Hip Hop releases of the 2000 decade (along with Lupe Fiasco's Food & Liquor, and 50 Cent's Get Rich or Die Trying). 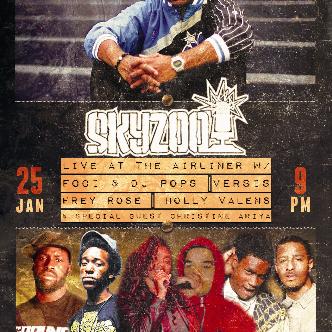