at The King of Clubs

The King of Clubs Presents:

Saving Abel is a Southern rock band with catchy hooks and heavy riffs founded by Jared Weeks and Jason Null. Their first single “Addicted” breaking on to the scene, climbing its way quickly into a cross over hit from mainstream rock to Billboard Hot 100 and Top 40. With millions of sales under their belt, it’s easy to see how their self titled debut album charted on Billboard’s Top 50 and became RIAA certified multi-platinum. Their debut album delivered two more #1 singles with 18 days and Drowning (Face Down), across multiple charts and solidified this bands name in rock.

Please note that tickets are $5 more the day of when purchased at the door. 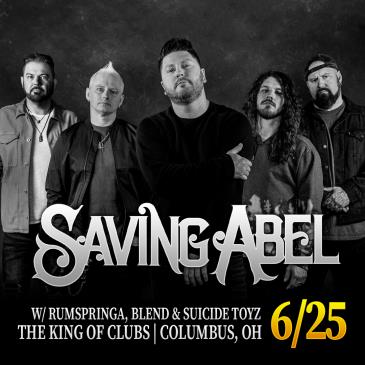 The King of Clubs