*THIS SHOW HAS NO COVID REQUIREMENTS FOR ENTRY*

Here’s what we know about Sad Night Dynamite. They make dark, deranged electronic pop  songs about demonic sailors and talking birds: a musical dream-world teetering on the  brink of nightmarishness. They are, also, a duo – first glimpsed brawling in the back of a  stretch limo as it works its way through the Czech countryside, in the surreal, funereal  short film that accompanied their experimental debut EP, ‘SND 001’. It’s an immersive  entry-point to the Sad Night Dynamite universe, and the charged, brother-like childhood  friendship between Archie and Josh underpinning it all. What matters, these young  producers/vocalists insist, isn’t whether everything makes sense right away; but that in a  world turned upside down, the fact that there is still a wonderland to get lost in. “We love  artists who build something bigger than themselves: worlds to explore and be lived in,”  says Josh. The result is a sound as explosive and evocative as the Sad Night Dynamite name  implies, marking the arrival of the UK’s most exciting new band.

Barely in their twenties, Sad Night Dynamite draw together a complex mix of sounds and  storytelling. It’s a place where dubby bass tremors, eerie synths and guitars intertwine  with riddlesome, near-rapped lyrics exploring the fantastical and the frightening. “We’ve  always been interested in light and shade: putting violence and beauty next to each other,”  says Archie of the philosophy behind their genre-colliding sound. In Sad Night Dynamite’s  early material, you’re as likely to hear a lifelong love of hip-hop meld with classic British  bands like The Specials as you are a pair just as enamoured by fellow-crate-diggers like The  Avalanches as they are the classic cinema scores of Tarantino. All have informed Archie and  Josh’s unique way with modern pop, and a project in which piercing home truths can be  found somewhere in-between the sublime and the ridiculous.

The pair live together in east London now, but first sewed the seeds for Sad Night Dynamite  at school. Archie and Josh were raised a stone’s throw from Glastonbury, only recognising  later how formative (and slightly feral) it was for tracks like ‘Icy Violence’ to grow up in  nature. “It’s like another dimension,” says Josh. “You pass small villages miles apart and  none of them have much infrastructure beyond a post office. If you need food, you have to  travel to super-stores that sit in the bigger towns like cruise ships. In London, you kind of  only know you’re part of the natural world when it suddenly rains.” It’s an outsider-status  Sad Night Dynamite quickly turned to their advantage, beginning to write music for the  band whilst separated during university; cue “tonnes of Facebook messages” and Logic files  bounced back and forth over email. Having collaborated most of their lives, Archie and  Josh’s distance arguably gave them the clarity to plot a project with “no formula, no time  limits, no genre. We wrote a couple of songs and knew we were onto something good, so  we just kept on writing.”

Sad Night Dynamite’s eurka-moment proved to be their first single, ‘Icy Violence’ - a  sprawling, ambitious and unpredictable tale that’s as stark a statement of intent as it is  (crucially) the sound of two young guys fucking about, and striking gold. “We wrote ‘Icy  Violence’ at the end of a really good summer,” they recall. “It has a beach theme and a  kidnapping, but the end part really reminds us of home, of green, of Glastonbury.” ‘Icy  Violence’ was also the blueprint for Sad Night Dynamite on how they could use fantasy to  explore much darker stories. “Coming up with the characters was really freeing. As ordinary people it’s quite easy to pigeonhole yourself writing about everyday experiences,  but now we can do and say whatever we wanted without limits.”

Once they’d found the formula, Sad Night Dynamite’s determination to keep on breaking it  is evident across their first mixtape. Tracks like ‘Chokehold’ find the middle-ground  between the atmospherics of UK rap, world-building pop like Gorillaz, and old-school Dr.  Dre: sometimes gnarly, at other times hazy, but all shot through with playful  experimentation. ‘Krunk’, meanwhile, thinks nothing of leaping from creepy mandolin noises into a G-funk groove, over which the pair trade raps about objectification from the  perspective of a druggy sea captain. “We go into some grey areas lyrically,” admits Josh. “If  something is deliberately shallow or horrible, exploring that through the other side can be  really powerful.” It’s eclectic and disruptive, but then that’s Sad Night Dynamite through  and through. What else would you expect from a band obsessed with doing something  “psychedelic and weird,” as Archie puts it?

You sense that Sad Night Dynamite are at the start of a greater adventure to come, though  they set the bar high for themselves in the chaotic trip abroad to shoot a visual for their  largely-instrumental EP, ‘SND 001’. “We wanted the film and that project as a whole to  almost act as a preface to us as a band,” the boys explain. “The narrative is open-ended, but  hints at a larger story to come. Each video is deliberately vague, but that comes back to us  wanting to play with perception.” Indeed, the fact very few of the Czech locals spoke  English but still connected with it drills into the longer-term ambitions of a band like Sad  Night Dynamite. “I think they identified with the project’s tone – there’s darkness and some  disillusionment in there but also - we hope - a lot of humour. The goal is ultimately to bring  our weird stories to as many people as possible.”

ANY TICKETS SUSPECTED OF BEING PURCHASED FOR THE SOLE PURPOSE OF RESELLING CAN BE CANCELLED AT THE DISCRETION OF VALLEY BAR SEE TICKETS. 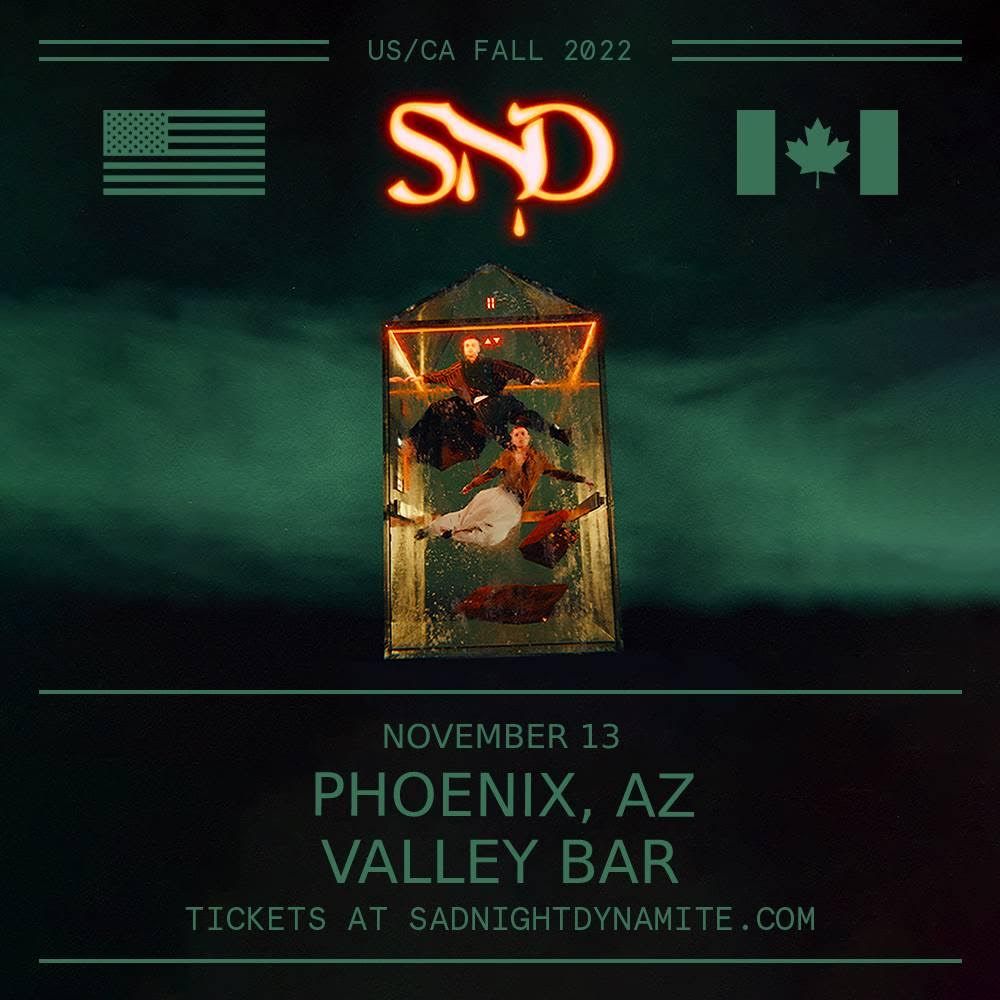