The Sophistakits is a project led by Eric McFadden featuring Eddie Roberts (New Mastersounds), Wally Ingram. The band, including Miles Tackett, Jeff Franca and Chris Spies, recently recorded their second single, "Sophistakiddin" which has just been released on ColorRed records.

ERIC McFADDEN
Eric McFadden is a virtuoso of thesix-string. He has toured the world both as a solo artist, as well as travelingwith funk legend George Clinton (Parliament/Funkadelic), and rock legend EricBurdon (The Animals). McFadden is a member of the new supergroup, T.E.N.(www.TEN-music.com) alongside Thomas Pridgen (Mars Volta) and Norwood Fisher(Fishbone). Eric has also been collaborating with Fishbone frontman, AngeloMoore, & Queen delphine with drummer Marcus Jones (Erykah Badu) on theirnew project called Tasty Face. If that isn't enough, you can catch Eric on theroad with his dear friend & New Orleans favorite, Anders Osborne! In thepast, McFadden has toured with Stockholm Syndrome, which includes notableplayers such as Dave Schools (Widespread Panic), Jerry Joseph (Jack Mormons),Wally Ingram (Sheryl Crow) and Danny Louis

EDDIE ROBERTS
Eddie started his music career proper in 1989 aged 18, having left his Welsh homeland to study Jazz at Leeds College of Music. More interested in live performing and getting his own thing going thanin college work, he quickly rooted out the best players in town and set up his first band, The Jazz Mailmen, dedicated to playing the golden era of Art Blakey's Jazz Messengers. After transcribing all the parts and enforcing adress code of Bop suits, he set about taking the UK Jazz Dance scene by storm.During this time British Hard Bop legend Tommy Chase asked him to relocate and join his band, but Eddie had other ideas...

Around 1991 Eddie's love for Grant Green inspired him to put a Hammond-based line up together. With the sound of Big John Patton, Lou Donaldson and Ivan Boogaloo, his band The Eddie Roberts Organisation toured UK and managed to get its first European dates at the 'Queen's Birthday Celebrations' in Amsterdam,The Netherlands.

The next step in 1993 was to downsize to a Hammond trio - this happened after meeting two guys who nailed it down more than the seven-piece that the Organisation had become. The Three Deuces were born. After a live album was released, (recorded at Leeds' legendary Jazz dance club The Yardbird Suite) great reviews ensured extensive touring opportunities: headlining Italy's Jazz festival in Bari with Greg Osby as well as many UK festivals, and the start of a regular slot at the Jazz Cafe, London. "Down at Art's" was play listed on JazzFM for most of 1996 - Art?s Caf�in central Leeds being the place where it all started and ran weekly for 3 years.

Other projects in tandem with the Deuces included Gaucho - inspired by Joe Henderson, Chico Hamilton, Gabo Szabo, Sam Rivers &c., comprising percussion, double bass, guitar, tenor sax & flute - and The Mastersounds with Simon Allen, Dan Brown and percussionist Sam Bell. In 1999 Eddie's focus shifted towards Deep Funk, and hence The New Mastersounds who started out performing a mix of Eddie's quirky Meters-inspired funk ditties and covers of Jimmy McGriff and Grant Green tunes in clubs and bars around Leeds and Manchester. Soon after, the first 7" was released on Blow it Hard Records("One Note Brown" is now a rare collectors' 45) they gigged at Jazz Cafe alongside Funk DJ & collector Keb Darge. This meeting proved to be a fruitful one - 3 singles and 1 album on Keb's label Deep Funk Records earned them the dubious title 'Best Funk Band in the World at this Moment'. 2001/2002 saw some heavy international touring for the extended 8-piece band which featured Cleve Freckleton and The Haggis Horns. Late 2002, whilst various options for a second NMS album were being considered, Eddie's own Cooker Records teased fans with a couple of new 7" singles, as well asre-releasing the highly sought-after debut album.

Eddie's love for 60's Blue Note & Hard Bop, however, didn't waver despite the media hype of the Deep Funk scene, and after a conversation with Adrian Gibson (Booker & DJ at Jazz Cafe/Messin? Around) Eddie was commissioned to produce a Hard Bop track for the Jazz dancers to go on a 'Messin Around' compilation. Eddie had alterior motives at this recording session - to record anumber of 'old-school' tracks with re-arranging & remixing in mind. This project is called Roughneck (a term often used to describe Eddie's dynamic guitar style) and over the course of 2003 the multi-tracks were fed into Eddie's creaking mainframe. "Diggin' Around", the first 12", was released in February 2003 and a wave of positive responses hit Cooker's shores.("Pure & genuine, double bass monster. Strong heavy Jazz elements.Very, very good!" said one Espen Horne).

In Spring 2003 Eddie was approached by UK DJ & producer Mr Scruff to playon his remix of the Ramsey Lewis classic ?Do What You Want? for the Verve Remixed series. Then in April the original New Mastersounds quartet (bass,drums, guitar, Hammond) took matters into their own hands and set up a dedicated label for the band, One Note Records, with drummer Simon Allen at the helm. The second NMS album, "Be Yourself" was written, recorded and mixed over summer 2003 and released in the UK that October. A much broader project than the first album (which had been, to a degree, constrained by the demands of Keb Darge's Deep Funk dance floor crowd) "Be Yourself" reflects more truly the scope of Eddie's musical influences and experience, hence the title.

The proceeds from "Be Yourself" were used to finance stage two of Eddie's Roughneck project - the double vinyl LP and CD of Roughneck was released summer 2004 on One Note Records and licensed to P-Vine Records in Japan six months later. After that there were select live shows Jazz Festivals and clubs, one of which yielded the live album "Roughneck: Live in Paris" (P-Vine 2005). The band- which features Gordon Kilroy on drums, Neil Innes on bass, Bill Laurance on piano, and guest performances from ex-NMS horn players Rob Lavers (sax) and Malcolm Strachan (trumpet) - was the obvious choice for Eddie's 2006 recording project "Trenta". This album, released early 2007 on Salvo's Records features Eddie's instrumental arrangements of traditional Neopolitan songs. Eddie decided it was time to give the Americans a taste of Roughneck so he flew them over to perform at High Sierra Music Festival last summer, where fans lapped up the soulful jazzy sounds.

Also in 2007 Eddie paid his first visit to New Orleans, with The New Mastersounds. The band played three shows over the first weekend of Jazzfest, but while the others went home, Eddie stayed on for an extra week and found himself guesting with a host of jazz and funk artists at late-night shows around the city including Galactic, Papa Mali, Johnny Vidocavitch, Idris Muhammed,The Greyboy Allstars. Later that summer Eddie joined Stanton Moore's trio for a festival gig, alongside keyboard wizard Robert Walter.

At time of writing Eddie has recently completed "Plug & Play" the The New Mastersounds' fifth studio album, and has just been hired to produce an album for French funk/afrobeat outfit Shaolin Temple Defenders.

Never one to sit back and put his feet up, Eddie tells us that the follow-up to Roughneck  provisionally entitled "Volume 2" can be expected later this year, and will feature collaborations with vocalists Leigh Kenny and Rhianna Kenny, vocalists with stadium techno act Faithless.

SETH FORD-YOUNG
Seth Ford-Young is a bassist, composer and singer based inLos Angeles. He has collaborated with a dazzling cross section of artists, fromTom Waits, Edward Sharpe and the Magnetic Zeros and Beats Antique to The HotClub of San Francisco, Rocco DeLuca and Barry Manilow.

Ford-Young started his musical adventures as thelead singer of punk band Initial Reaction, which played clubs around WashingtonDC. While it might seem like a long journey from DC Hardcore to Parisian cafémusic, Pop and Jazz, Ford-Young gleaned a tremendous amount of informationabout life on and off the bandstand during his punk days that he’s stilldrawing from today.

Growing up in Alabama, Chris was struck at an early age by the musical sounds coming from nearby New Orleans and quickly became a staple on the music scene since moving there in 2011. Since then he has performed with a who's who of New Orleans greats including Russell Batiste, George Porter Jr, Papa Mali, Johnny Vidacovich and members from Galactic in the band Good Enough For Good Times. In 2017 Chris had the honor of playing with Phil Lesh and the Terrapin Family Band for a benefit recording project. When not playing with Matador! Soul Sounds you can find Chris touring with New Orleans favorites the Honey Island Swamp Band. 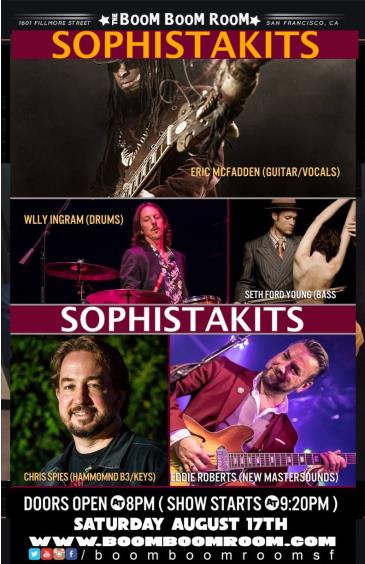