REEL BIG FISH BIO
Reel Big Fish was one of the legions of Southern California ska-punk bands to edge into the mainstream following the mid-’90s success of No Doubt and Sublime. Like most of their peers, the band was distinguished by their hyperkinetic stage shows, juvenile humor, ironic covers of new wave pop songs, and metallic shards of ska. The group cultivated an underground following that broke into the mainstream in summer 1997, when their single “Sell Out” became a modern rock radio and MTV favorite. Their appearance in the movie “Baseketball” as the halftime band also gained them more fans and helped the bands popularity to grow. Still fronted by original lead singer and song writer Aaron Barrett, they continue releasing albums and touring relentlessly, playing more and more countries and  bigger venues all over the world. Reel Big Fish recorded its self-released debut album, “Everything Sucks”, in 1995. “Everything Sucks” became a word-of-mouth underground hit in ska-punk and college circles, which gave the band enough leverage to sign with the indie label Mojo Records. The label’s president, Jay Rifkin, and former Oingo Boingo bassist John Avila co-produced “Turn the Radio Off”, which marked Reel Big Fish’s first album for Mojo. “Turn the Radio Off” was unleashed in August 1996, and over the next year, the group continually toured in support of the album’s release, expanding their fan base all the while. In spring 1997, the single “Sell Out” began receiving heavy airplay from several influential modern rock stations in the U.S., which soon translated into MTV support for the song’s quirky video. By summer, the song had become a moderate modern rock hit, and the album had charted in the Top 100. In 1998 the song “Take on Me” from the “Baseketball” motion picture soundtrack was released as the promotional single for the movie and once again found the band in regular rotation on rock radio and MTV in the USA. The Album “Why Do They Rock So Hard” followed a year later, once again enlisting Oingo Boingo Bassist John Avila as producer. The album was not as commercially successful but is still regarded by many fans as the bands finest work. The band filmed a music video for “the Set up (You Need This)”, the only single released from this album.

The guys wound up on Jive Records in fall 2001 when their current label, Mojo, was bought by Jive’s parent label, Zomba. Reel Big Fish’s first release for Jive, a more rock-oriented record entitled “Cheer Up!”, appeared in mid-2002. This album was very successful in Europe with the video for the single “Where Have You Been”  receiving heavy airplay on many music video channels. The band’s next album, the cynical yet catchy “We’re Not Happy ‘Til You’re Not Happy”, was issued in April 2005. Touring continued for the rest of the year, and Reel Big Fish happily parted ways with Jive in January 2006, having wished to be dropped from the label since the “Cheer Up!” release. In August 2006, the group self-released a double-disc live CD (along with an accompanying DVD) titled “Our Live Album Is Better Than Your Live Album”. A few months later — and much to the annoyance of the band — Jive issued its own Reel Big Fish album, a best-of compilation entitled “Greatest Hit...and More”. Reel Big Fish received no money from the album’s sales, as Jive Records now owned the rights to the bulk of their songs.  The band has urged fans not to buy this album because it was not approved by them and the sound quality is inferior. Nevertheless, the band returned with some new material in February 2007, splitting an EP “Duet All Night Long” with their friends in Zolof the Rock & Roll Destroyer. “Monkeys for Nothin’ and the Chimps for Free” followed several months later, marking Reel Big Fish’s first full-length studio release since leaving Jive’s roster, and 2009′s “Fame, Fortune and Fornication” found the band covering songs by the likes of Poison, the Eagles, and Tom Petty. The band’s latest release is called “A Best of Us for the Rest of Us”. It includes a 22 song disc of re-recorded hits and classic fan favorites as well as a bonus disc of 14 Acoustic or “SKAcoustic” versions. On July 31st, 2012 Reel Big Fish release their 7th studio album, Candy Coated Fury (Rock Ridge Music), an inspired  and infectiously catchy return to the hyperkinetic ska and biting wit of the band’s beloved early albums. “This album is a lot like our first two albums. It’s got a lot of the same intensity, frantic energy in the music, and the same sarcastic sense of humor. I think these are the fastest songs we’ve done since those albums,” Aaron Barrett, founding vocalist, guitarist, and principal songwriter says.

“We’re finally just doing what Reel Big Fish does best, and that’s what we did on those first two albums.” “Candy coated fury pretty much describes what Reel Big Fish does,” Barrett says of the significance of the new album’s title. “It’s hateful, mean, sarcastic, and, sometimes sad lyrics, over happy, wacky, silly, joyous, fast music that makes you want to dance. This album is mostly love songs, but bitter, angry, hateful love songs. Just about everybody knows what it’s like to be in a bad relationship. These songs could be sung by a 15 year old about his first love-gone-wrong, or by a 55 year old about a bitter divorce after 30 years. They’re bad-relationship songs that everybody can relate to.” Candy Coated Fury is Reel Big Fish’s first album of newly recorded original material in five years. Overall, it’s the seventh in the band’s twenty year history, and it feels as vital and vitriolic as RBF’s foundational releases. The record opens with the huge sing-along vocal, balmy horns, and hyperactive ska groove of “Everyone Else Is An Asshole.” The track is an exceptional distillation of Reel Big Fish’s classic euphorically-juvenile ska punk. The stately arena riffs in “I Dare You To Break My Heart” reference cock rock, new wave, and soul without sacrificing one iota of RBF’s signature simmering skank. “I listen to the Darkness a lot; it was only a matter of time till I wrote a song like this! I can’t really sing as high as that guy so this song sounds more like Kiss, if Kiss was a Motown band that played ska,” Barrett says, detailing the song’s diverse stylistic touchstones.  The anthemic “I Know You Too Well To Like You Anymore” features some of Barrett’s finest cutely cruel lyrics. “I think that is an amazing bad-relationship song,” he laughs. “I really captured the hateful love of two people who were once madly in love, but have been together so long, they can’t stand the sight of each other anymore but still say ‘they drive me crazy, and I hate this and this about them, but I love them.’” No RBF album would be complete without playfully irreverent 1980s covers. The band rounds things out ska-ifying the Wonderstuff’s “Don’t Let Me Down Gently” and When In Rome’s “The Promise.” Reel Big Fish continues to tour non-stop, playing over 250 shows a year to thousands of loyal fans all over the world, gaining more and more underground popularity as the Ska scene continues to flourish.

Less Than Jake are back! "But they never went anywhere," you protest. Well reader, in that sense you are correct. But this fall they're not only serving up their first full-length in five years, but—after more than two decades together—also embracing a total back to basics approach. Throughout  a  career  that  has  run  the  gamut  from  self-releases  and  small  indie  imprints  to  large independent labels and major music conglomerates, the band has always been more than the sum of its  parts.  Now  more  than  ever,  though,  they  espouse  their  stature  as  a  DIY  collective  that  works together—or at least in tandem with a few trusted allies—on every element of their creative output. Drummer  Vinnie  Fiorello  recalls,  "We  started  out  very  internal,  and  nowadays  we  handle  a  lot internally again.” The  result  of  their  old  school  approach  is  the  old school  sound  of  See  The  Light,  created  without any external meddling from corporate lackeys. "Everyone had their alone time with chords and some quick structures; we all put our ideas down before we got together," says Vinnie. "Then we sat at an  octagon  table  in  our  warehouse  and  went  through:  this  is  what  we  think  about  this  song, maybe we should do it ska, maybe we should do it punk—true band songwriting in essence."

Not  only  was  the  songwriting  a  true  group  effort,  but—like  the  three  EPs  the  band  have  released since  2008's  long-player  GNV  FLA—so  was  the  actual recording  of  See  The  Light,  which  was tracked  entirely  at  Gainesville’s  The  Moathouse,  owned  by  LTJ  bassist  Roger  Lima,  who  took  lead production  duties  with  communal  input  and  assistance  from  his  four  band  mates  and  live  sound engineer. "Roger has been recording our demos since the beginning of the band and steadily has  worked his way up learning about studios from everyone we've worked with in the past," says trombone player Buddy Schaub. With no ticking clock and no studio fees piling up, the band used their breathing room to  create  somewhat  of  a  rarity  in  today’s  prefab  music  world:  a  full-length  album  that  gels  as  a complete  thought,  lyrically  and  musically.  Buddy  adds,  "I  think  this  is  one  of  the  closest representations of our band to date. We're all really excited for this record to get out into the world and we can't wait to hear what people think!”

Like  2000’s  release  Borders  and  Boundaries,  the  new  record  was  mixed  at  the  famed  Blasting Room by punk rock legend Bill Stevenson (Descendents, Black Flag) and Jason Livermore, but don’t let that lead you to believe that there's anything same-ish about See The Light. "If you're expecting retreads  and  repeats,  this  record  will  disappoint,"  exclaims  Roger.  "It’s  all  new  songs  and  new vibes only recorded in our old school way." While  some  other  bands  of  a  certain  vintage  are  latching  onto  musical  trends,  you  won't  find  any dubstep  beats  or  vocoder  distortion  on  See  The  Light—a  title  that  nods  to  the  band,  history  of marrying  dark  lyrical  content  (the  tunnel)  to  bouncy  musical  arrangements  (the  light  at  the  end). Less Than Jake aren't turning away from their roots, and echoing Mark Twain, Fiorello points out that the rumors regarding their genre,  demise  are  greatly  exaggerated:  "Punk  has  been  declared  dead every year for  30+ years and it's still going  stronger  than ever. People like to declare things dead just because it’s dead to them, but if bands are passionate about what they're doing, they'll attract fans who are passionate.” 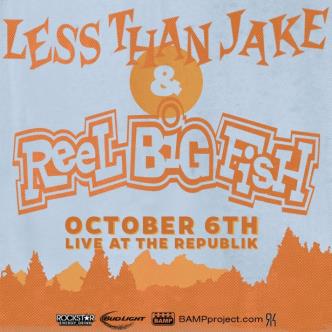