﻿“I like the idea of the record starting in a way that doesn’t make any sense at all for a Red Fang record.”

“It reminds me of a time before people listened to music digitally—and they listened to full albums,” drummer John Sherman adds. “There were often cool, spooky intros—like fuckin’ Dio albums and shit. There are some weird sounds at the beginning to get you in the mood before it blasts off.”

And blast off it does. After the woozy opening salvo of “Take It Back,” Arrows launches into a super-rock trifecta of what Red Fang does best—from Melvins-esque power dirge “Unreal Estate” into the anthemic title track into up-tempo banger “My Disaster.”

Yeah, it’s been nearly five years since 2016’s Only Ghosts, but your favorite beer-crushing, zombie-killing, air-guitar-contest-judging metal heroes are back in action, doing what they do best—AND MORE. “This record feels more like Murder The Mountains to me than any record we’ve done before or since,” Beam ventures. “It doesn’t sound like that record, but Murder The Mountains was us doing whatever the fuck we wanted, and that’s what this is, too.”

“We’re definitely exploring new territory,” says guitarist/vocalist Bryan Giles. “And I’m very happy about that. I wouldn’t wanna be in this band if we kept doing the same thing over and over again.”

Arrows was recorded at Halfling Studios in the band’s hometown of Portland, OR, with longtime collaborator Chris Funk, who produced Murder The Mountains and 2013’s Whales and Leeches. “Chris is a major influencer as far as the weird ambient stuff in between the songs and the creepy incidental noises within the songs,” Giles points out. “I think he definitely creates an added layer of atmosphere that we wouldn’t have otherwise.”

In an effort to compound said atmosphere, Sherman recorded some of his drum parts at the bottom of a pool. Luckily, it was empty. “It’s actually a kick-ass skate pool,” the drummer explains. “It was designed by Lance Mountain, if I’ve got my facts straight. As soon as we decided to record there, I knew I would end up in the pool at some point.”

“The pool was a big part of the record,” Giles confirms. “The drums sound so huge—it’s crazy. But I was terrified of the pool because there was no railing. Every time I walked by, I was afraid of falling into it. So it was a love/hate relationship with the pool for me.”

The title Arrows was chosen through Red Fang’s patented and labor-intensive selection process. “Of all the titles that got thrown around, that was the one everyone hated the least,” Sherman explains. “Which is the case with every record, pretty much.”

“It’s actually the same way we decided on the band name,” Beam chimes in. “It was the only one where someone wasn’t like, ‘NO!’” Arrows has the added bonus of a proper title track, which is new territory for the dudes. “This is the first time we’ve named an album after a song that’s actually on the album,” Beam explains. “We have other albums that are named after songs of ours that are not on those albums. So this time we’re really fucking with you because we didn’t fuck with you.”

It just so happens that the title track is also the lead single for the album—the general public’s first taste of fresh Fang. “There’s some songs that are pretty clearly Red Fang on this album, and others that maybe go a little further outside of what we’ve normally done,” Beam explains. “‘Prehistoric Dog’ was clearly the song to pick for the first single from the first record. ‘Wires’ was clearly the song to pick from the second record. I’m not sure there was a clear frontrunner on this album, which could be taken to mean that either all of the songs are kind of mediocre at best or there are quite a few that could qualify as the lead single. So it came down to the ones that the dudes who are making the videos liked best.”

Which brings us to director Rob McConnaughy, who created the pants-pissing clips for “Prehistoric Dog,” “Wires” and many other Red Fang hits. “His way of presenting us really works,” guitarist David Sullivan says. “That first video he did for us for ‘Prehistoric Dog’ gave us a big jumpstart as far as the band getting popular. And we love working with him.”

Over the years, McConnaughy has helped showcase an aspect of Red Fang that most metal and hard rock bands shy away from: Humor. “It suits our personalities,” Giles points out. “I mean, I don’t wanna fight people, you know? If I look like I’m flexing, they’ll be like, ‘Oh, I can take him.’ But if we’re making a joke, maybe someone will wanna tell me a joke—or buy me a beer.” “If you were to have dinner with the band, it would be closer to one of our videos than, like, us walking in slow-mo through the fog with a goat’s head,” he adds. “I mean, no one’s gonna believe that shit.”

Similarly, fans might not believe what the song “Arrows” is partially about. “If you’re confused by some of the lyrics to that song, that makes sense,” Beam explains. “But it makes reference to meditation. I started meditating six years ago, but I can only do it when I’m not feeling too anxious. So, when I don’t need it, that’s when I can do it.”

Elsewhere, “Fonzi Scheme” was named after legendary Happy Days cool guy Arthur Fonzarelli—if only because it’s in the key of his famous catchphrase, “Aaay.” Producer Chris Funk came up with the idea of bringing in string players from the Portland Cello Project to class up the track. “I would say laziness drove that decision,” Beam deadpans. “We didn’t want to come up with any guitar melodies, so we hired someone else to do it for us.”

Meanwhile, the opening riff of closer “Funeral Coach” was written 12 years ago. But it took until recently for the song to blossom into its full double-entendre glory. “I was driving around and I saw a hearse that said ‘funeral coach services’ on the back,” Beam explains. “So the first thing that popped into my head was a dude with a headset and a clipboard going, ‘Alright, dudes—more tears! Five minutes in is when the tears are critical, or no one’s gonna believe that anyone cares that this person died.’”

In a nod to tradition, Arrows will be available in formats that include all the drums, bass, guitars and vocals. But it could’ve gone another way. “Our original idea was to release the album with no vocals or guitar solos,” Beam explains. “If you want the guitar solos, it’s an extra five bucks. If you want the vocals, it’s an extra ten bucks. So basically people should feel lucky that we didn’t do that. You get to buy the whole thing all together.”

Red Fang think of it as a generous display of gratitude toward their fans. “Yeah,” says Sherman, “Thank you for buying our album, you lucky bastards.”

﻿Born on the streets of Los Angeles, Starcrawler is a band possessed by the spirit of its own hometown, every movement charged with a manic electricity. Since forming in 2015, vocalist Arrow de Wilde, guitarist/vocalist Henri Cash, bassist Tim Franco, and drummer Austin Smith have gone from bashing out songs in the garage to winning the love of such legendary artists as Shirley Manson and Elton John. They’ve also opened for the likes of Beck, Foo Fighters, Spoon, The Distillers, and MC5, bringing their unhinged energy to an already-fabled live show — a spectacle that’s simultaneously lurid and glorious and elegant as ballet. On their sophomore full-length Devour You, Starcrawler captures that dynamic with a whole new precision, revealing their rare ability to find a fragile beauty in even the greatest chaos.

With a name like Warish, the San Diego noisy punk-metal trio assured listeners they were in for a maniacal bludgeoning from the get-go. But the band has never been as dark and bitingly vicious as the wholly ominous Next To Pay. The band’s mix of early AmRep skronk, dark horror rock and budget doom antipathy is taken to a whole new level on this 13-song invective.

“‘Next To Pay’ is about a sense of imminent doom, everyone is going to die,” vocalist/guitarist Riley Hawk says. “It’s not the happiest record, I guess.” To say the least. On the title track opener, Hawk screams through shredded vocal chords with the tuneful rage of Kill ‘Em All era James Hetfield and the seething desperation of Kurt Cobain.

“This album is more of an evolution, it’s a little more punk-heavy,” Hawk says of the group quickly founded in 2018. “We figured out what our sound was.” And with that evolution comes a change in the lineup. Original drummer Nick (Broose) McDonnell plays on about half of the songs, while new drummer Justin de la Vega brings an even tighter urgency to the remaining, more recent tracks. Bassist Alex Bassaj joined after the debut album was recorded and here showcases muscular and melodic low end previously missing. Riley Hawk is also the pro-skater son of Tony Hawk.

Inspired by early-Nirvana, The Misfits, The Spits and Master of Reality-era Black Sabbath, Next To Pay keeps things heavy and pummeling at all times. The guitars are heavy and powerful, though decidedly not straightforward cookie cutter punk; more like Greg Ginn’s and Buzz Osbourne’s wiry contortions, and occasionally drenched in chorus effects. The rhythms bash right through it all with aggressive force ensuring that nothing gets overly complicated. Warish’s cover of 80s Dischord Records punks Gray Matter turns the emotive flail of “Burn No Bridges” into a Motorhead style basher. 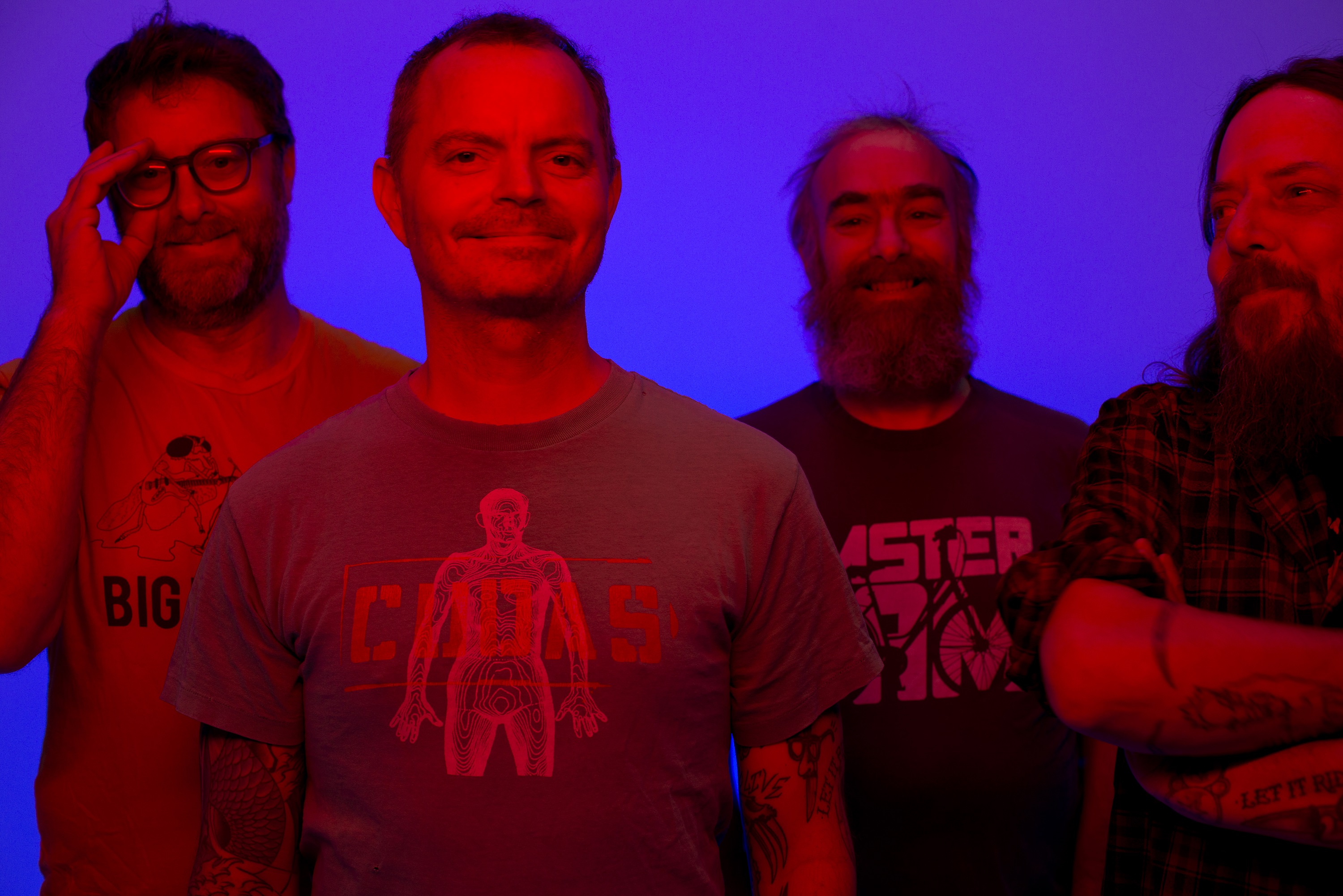