For the last 20 years, Kristian Nairn has been one of Ireland’s most prolific resident house DJs. He has remixed tracks for the Freemasons, Madison Avenue and Duke to name but a few, and has played alongside some of the best in the business, such as Steve Aoki, Dimitri Vegas and Like Mike, Fatboy Slim, Danny Howard and many more.

Kristian has played at venues all over the world including international superclubs Amnesia, Cafe Mambo and Hakkasan. He has also played at some of the biggest dance festivals, including Tomorrowland in Belgium, Untold Festival in Romania and Sunburn Festival in India.

As well as his musical talent, he is famous for his role as the much loved character ‘Hodor’ in HBO’s juggernaut series Game of Thrones, which has obtained an exceptionally broad and active international fan base. It received widespread acclaim by critics, and the series has won numerous awards and nominations including two Primetime Emmy Award nominations for Outstanding Drama Series and a Golden Globe Award nomination for Best Television Series – Drama.

Ticket(s) purchased via this website may be claimed at the WILL CALL desk at AVALON only on the night of the event. Please bring the credit card used to purchase the ticket(s) along with a valid PICTURE ID documenting that you and your guest(s) are at least 21 years of age. Photocopies will not be accepted.

You may log into your ticketing account to transfer ticket(s) to another attendee's name. When transferring a ticket, the credit card is not needed at Will Call pick up, but the ID must match the name of the person picking up tickets, no exceptions. 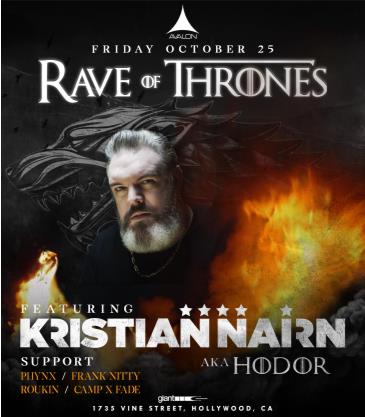